A Catalan Experience in the Cairngorms

Never let it be said that Yapp Brothers are a parochial bunch who aren’t prepared to spread the good word far and wide.

Last week I stepped off the Bristol - Glasgow flight to join up with ace Catalan wine maker Christine Campadieu who had come from Collioure, via Barcelona and Berlin (where she had taken part in a gourmet wine dinner at Michelin 2 star, Regent hotel). To complete the international mix, I’d persuaded my Colombian wife to head up from London for a spin around the Highlands. Thus assembled, our polyglot hire car headed north up the A9 to host a tasting and dinner at The Cross at Kingussie, in the heart of the Cairngorms National Park. 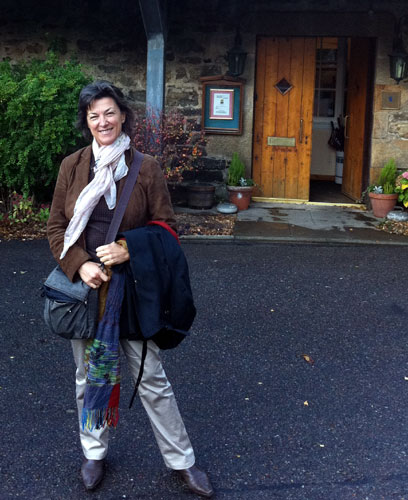 Christine Campadieu outside The Cross, Kingussie

David and Katie Young’s welcoming ‘restaurant with rooms’ is a must for any greedy wine lover who fancies a break in some wonderful countryside. A great deal of love and attention has gone into putting together a terrific wine list, which has been regularly commended, most recently Imbibe’s Small Restaurant Wine List of the Year 2011. In fact, the Youngs’ visit to Domaine Le Tour Vieille last year was the catalyst for this event.

To kick off the evening, Christine provided guests with an entertaining introduction to the wines of Roussillon and conducted an hour long tutored tasting covering eight wines from the estate. We then enjoyed white Collioure with an inspired Catalan dish of salt & pepper squid with anchovy aioli, before washing down Rothiemurchus Estate roe deer with red Collioure Pinède 2008. The local Blarliath cheese course accompanied red Puig Oriole 2008 before the finale of a wonderful chocolate brownie with heavenly Banyuls Réserva. I think Christine and Isabel were suitably impressed (possibly shocked) that I managed a digestif of Bruichladdich Octomore, the world’s peatiest whisky.

The next day, fortified by a hearty breakfast where attention to every detail was again evident (homemade HP sauce with locally-sourced sausages and black pudding, alongside Boston-style baked beans) and refreshed by a stroll up the river that feeds this one-time Tweed mill (where we spotted red squirrel), we headed South.

If you are heading into the Cairngorms, I would strongly recommend a visit to the Edradour Whisky Distillery just outside Pitlochry. It’s Scotland’s smallest distillery, a gem and what there is to know about Malt Whisky that our guide Frank couldn’t tell us, isn’t worth knowing. 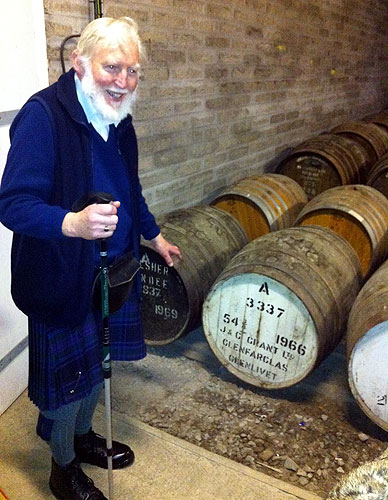