A Rhône River runs through it: Howards House Hotel

If one were guiding a tourist to the quintessential English village, Teffont Evias in the Nadder valley 15 miles west of Salisbury would be right up there in my UK top ten. Approached from the Salisbury direction, one descends past sheep grazing on the terraced fields, the impossibly picturesque church and you arrive among 17th century thatched houses alongside a babbling stream. In the centre of the village is Howards House Hotel which dates back to the same era, but has been stylishly modernised, firstly by Noele Thompson and then by current owner Grahame Senior. 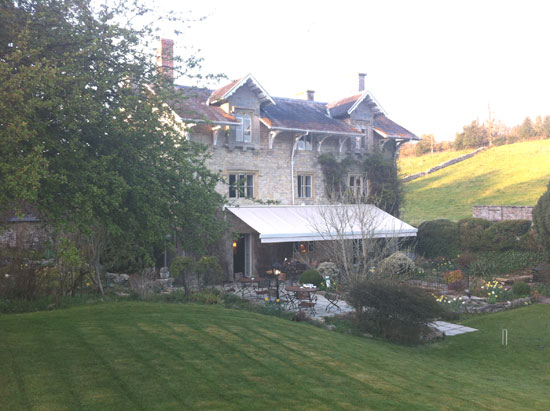 Being 10 miles down the road from Mere, this was very much a home ‘gig’ which attracted an enthusiastic crowd of loyal Yapp locals. The evening was focused on seasonal English ingredients (given an enterprising twist by chef, Nick Wentworth), partnered by Rhône wines. Hence, we kicked off with St Péray mousseux and the challenging starter that included rhubard and ginger was matched with Vernay’s terrific Viognier, Le Pied de Samson. Champet’s Cote Rotie 2006 was a terrific accompaniment to the lamb, particularly the loin cut, while (my table condsidered) the confit element went well with the Lirac La Fermade 2009.

Colsten Basset stilton followed and white chocolate mousse was the finale. Durban’ Muscat de Beaumes de Venise (natch.) was a good friend to both dishes, and needed to be for those who had finished their reds before the cheese arrived!

A fine night in an idyllic setting. 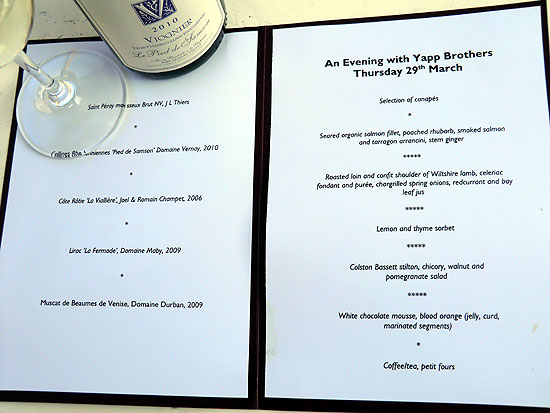