To Otto’s at number 182 on the Gray’s Inn Road last night to sample a dazzling vertical of Domaine de Trévallon accompanied by a decadent menu of specially selected dishes. The eponymous Otto and I go way back to the days when he was buying wine for a grand fin de siècle restaurant called the Auberge de Provence back in the 1990s. 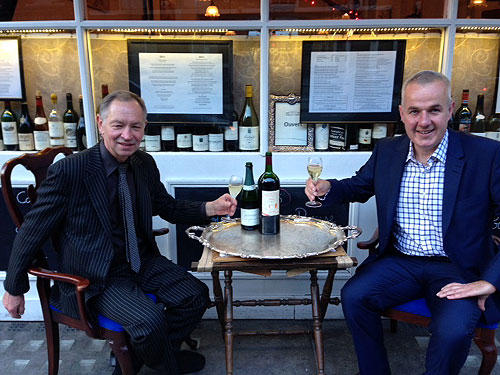 As a young man Otto cut his teeth at La Tour d’Argent in Paris where he learned the arcane intricacies of the duck press and became a master of food and wine matching - skills which serve him well to this day. The wine list at Otto’s is lovingly curated and very reasonably-priced so unsurprisingly the restaurant is a default destination for gastronomically inclined oenophiles. To reward the party faithful Otto arranges periodical wine dinners when venerable vintages are broached alongside specially selected dishes. 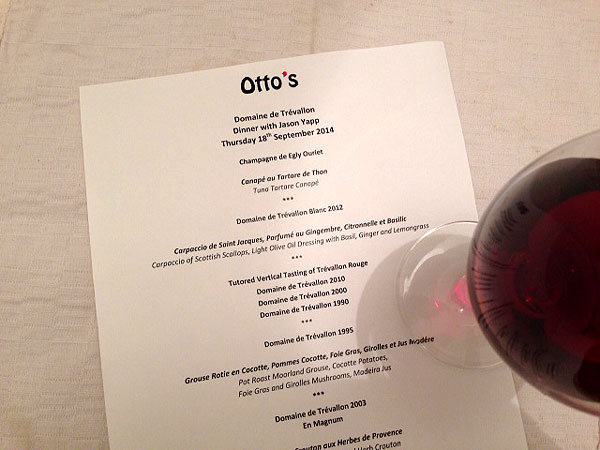 If a job is worth doing it worth doing well so Otto and I pulled out all the stops to produce a selection of wines and dishes that I very much doubt will ever be emulated. I had no idea what to serve as an aperitif so deferred to the creator of Domaine de Trévallon, Eloi Dürrbach, who staunchly recommended Egly Ouriet ‘Vignes de Vrigny’ Champagne. This is a lovely, fruity, citrus-edged wine made from pure Pinot Meunier on a family-run estate just to the west of Reims and I commend it to you. It set the stage nicely along with some tiny toasts of tuna tartare.

Once guests were seated we sampled the recently-released Domaine de Trévallon Blanc 2012 – a heady blend of 45% Marsanne, 45% Roussanne and 10% Chardonnay. It went down very well with a scallop carpaccio served with a basil, ginger and lemongrass dressing. In common with much white Rhône and Burgundy I expect that it is a wine that will age gracefully but it is drinking very well on its youthful fruit. 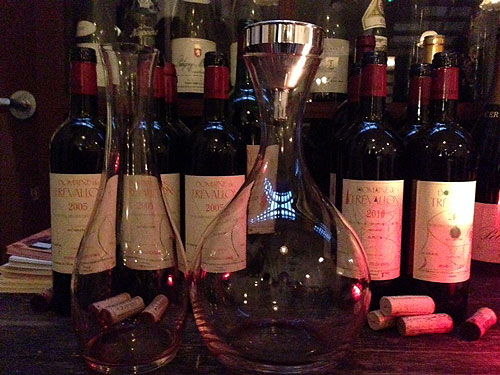 We then indulged in a flight of four vintages of red Trévallon. The 2010 – which is drinking amazingly-well for such a young wine and has very pure fruit and a fresh acidity. The 2000, which coming towards its prime but has plenty still to offer. The glorious 1990, which is fully mature, sensuous, rounded sweet and cedary and the impossible to source, touch-stone 1982 – a wine we sipped with reverence as there is none left in the Dürrbach cellars.

We then enjoyed a dish of casseroled grouse with foie gras and girolles along with a pairing of the 1995 and 2005 vintages. These two wines are not dissimilar in disposition but clearly demonstrate the benefits of bottle age as the 1995s rugged tannins have softened and yielded to a core of Autumnal dark fruit whilst the 2005 still has a degree of austerity and unyielding reserve.

We then tucked in to magnums from the sun-drenched 2003 vintage, that exudes warmth and southern spice, and went down a treat with some baked Saint-Marcellin.

To round off proceedings we were served an unimpeachable pear and almond tart accompanied by the ever-reliable Domaine de Durban: Muscat de Beaumes de Venise in the 2010 vintage that was chosen for its relative geographical proximity to Les Alpilles and its failsafe, crowd-pleasing qualities.

Everyone departed sated with a deeper insight into one of France’s most intriguing estates.

With thanks to Victoria Moore, Andrea Fasan, the ridiculously well-informed David Beresford , the Yap family (no relation) and the team at Otto’s for a highly-entertaining soirée.