Great to see so many Yapp customers at our tasting at Vintners' Hall on Tuesday evening, many of whom gamely had a crack at identifying our blind wine. We never find blind tasting easy (indeed, it's often humbling), but it keeps one match-fit and focuses the mind. The wine was Patrick Jasmin's Côte Rôtie 2001. Only one individual identified the appellation and they reckoned it was 2009 (which shows how well the 2001 has aged). Close, but no cigar - we'll send them a corkscrew as we're feeling generous! Several entrants thought the wine was Burgundy which isn't far off the mark as Patrick's Côte Rôtie has been described by Robert Parker as "the most Burgundian of the appellation". Here's Bob's tasting note on the wine itself which he scored 90-92/100:
"The 2001 Cote Rotie's deep ruby color is accompanied by explosive aromas of sweet raspberry fruit intermixed with a hint of apricots (7-8% Viognier is added to the blend). Well-delineated and floral, with a cherry/raspberry fruit component beautifully displayed, this medium-bodied 2001 is not a blockbuster, but it wins the taster over with its delicacy and finesse." 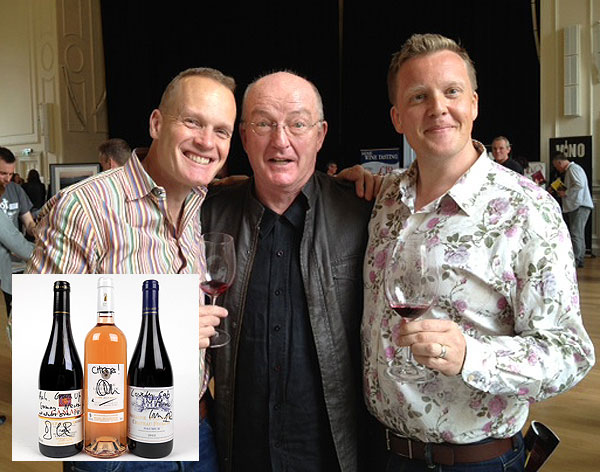 We also wrapped up our competition to win bottles signed by the 'Three Wine Men' Olly Smith, Oz Clarke and Tim Atkin.
Ms. Benson from Yorkshire receives the bottles as she was randomly selected from 'correct respondents'. There were five runners-up, and the answers were as follows:

Watch these pages for more competitions and, in the meantime, more practice needed on your blind tasting!