They say you should never meet your heroes, presumably because you’ll be disappointed to discover their feet of clay but there are exceptions to prove every rule. I grew up loving the storybooks written and boldly illustrated by John Burningham. Borka the goose without feathers, Humbert the dray horse who pulled the Lord Mayors coach, Cannonball Simp – the dog who joined the circus and Trubloff the balalaika-playing mouse were all firm favourites of mine that I read and re-read time and again. Happily my battered originals have survived to be enjoyed in turn by my own children along with later titles such as Avocado Baby, Would You Rather… and Oi! Get Off Our Train. I was therefore quite excited back in 2008 when my partner Pippa mentioned that John’s daughter Lucy was singing in the same choir as her and positively euphoric to learn that John and his wife Helen Oxenbury (who is also an acclaimed illustrator) were going to be hosting a joint book reading at our terrific local book shop the Hunting Raven - www.huntingravenbooks.co.uk. We duly attended the reading en famille and John and Helen were very engaging and patiently fielded questions from their young and not so young admirers. 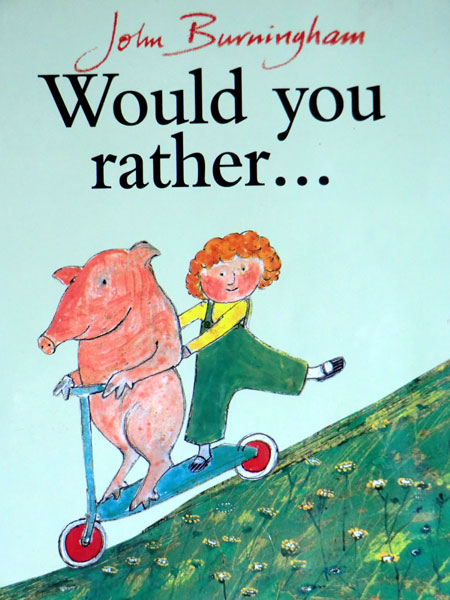 I subsequently contacted John and asked him if he would be interested in illustrating the 2009 edition of our wine list and after some consultation over a bottle or two he acquiesced. In truth, John took very little persuading as he is a keen oenophile and Francophile who regularly visits the Rhône valley.

We were delighted to sponsor the opening party last week for a major retrospective of John’s 50-plus year career, at the Fleming Collection, 13 Berkeley Street, London W1. This superb show is stuffed full of gems including the original maquette of Chitty-Chitty-Bang-Bang, early note books, the childhood toy that inspired Borka and a wealth of original artwork. Attendees enjoyed lashings of our Crémant de Limoux Brut from Domaine Collin – a crowd-pleasing Pinot Noir and Chardonnay blend - but they would probably have enjoyed anything surrounded by decades of awesome artwork by one of the UK’s foremost talents.

Anybody remotely interested in graphic art, illustration or children’s literature should make a bee-line for this superlative show. It is open on Tuesdays to Saturdays from 10am-5.30pm and is on until December 22nd. Entry is free so what are you waiting for?