Bringing it all back home

Bastille Day. I stood in Start Pen 7 (out of 9) in Pau’s Place de Verdun at 6.15, surrounded by 8,000 other riders. A sea of lycra and bikes. They say that cycling is now worth £2bn to the UK economy and most of it seemed to have turned up in Pau. Half the participants of this Etape Act 2 were ‘etrangers’ including some 2,000 Brits. Ahead lay 200km of road and nearly 5,000 vertical metres of climbs over four ‘Cols’ known in the Tour de France folklore as ‘the Circle of Death’. 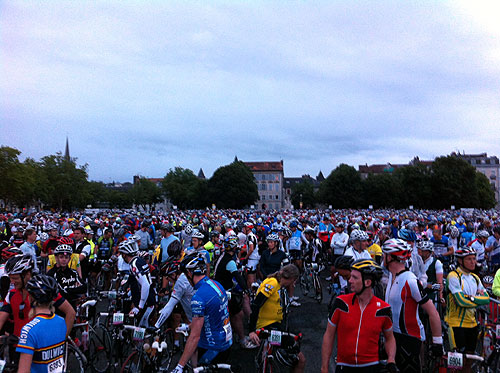 Friends, family and colleagues had asked me why I was doing this and it’s not an easy question to answer, although it was a question I asked myself several times over the course of the day. Part of it is certainly the physical challenge, part of it more along the mountaineering rationale ‘because its there’. Predominantly, it was the prospect of riding with friends in the wheelmarks of Tour de France heroes on legendary climbs that had been used in ‘Le Grand Boucle’ for over a century.

Team Yapp consisted of six riders spread across five starting pens – three Englishman, an Irishman, a Scotsman and an American. Start Pen 7 was released at 7:30 and we sped out of Pau rather like a National Hunt race careering towards the first fence, covering the 20 miles to the foot of the Col d’Aubisque in an hour. The climbing started and the conversation dried up. Around half way into this 11 mile climb a steady drizzle broke, which was to be the theme for the day. On the ascent this was pleasantly cooling, but once we had crested the summit it was a whole different ballgame. As Viz magazine might say, ‘recreate the thrill of a Pyrenean descent, by sticking your hands out of the car window for 20 minutes at 40 miles an hour in the chilly rain’. By the time we reached the valley at Argeles, the feed station was a battle scene of tin foil blankets and shivering riders. We later found out that of the 8,000 starters, over half quit the race, largely down to the cold. In fairness, those of us who had trained in the UK for the past 6 months were perfectly at home, we might just have well been in the Brecons, Chilterns or Box Hill in February. 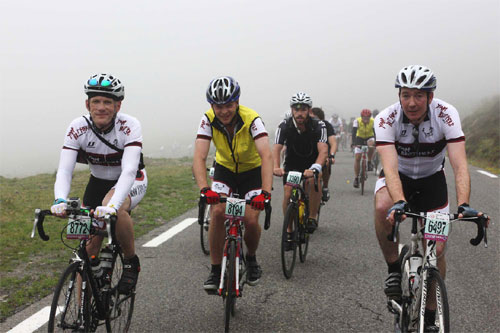 The infamous Col de Tourmalet was next up and provided more of the same - foggy ascent, freezing descent, more abandoned bikes. Team Yapp regrouped after the descent for a teeth-chattering ‘team hug’ at the feedstation at Saint Marie de Campan, a place made famous in 1913 as it was here that Tour de France leader Eugene Christophe had stopped to mend his broken front forks at a forge and was later disqualified for ‘assistance’ as a local lad had pumped the bellows.

Two more climbs – the Aspin and Peyrousourde were successfully negotiated and we swept down the final 10km drop into Bagneres de Luchon. By 7pm four of us had crossed the finish line, the official time limit when the Gendarmes would close the course was 7:45. Two of our number, Kieran and David were still on the course. To be fair, both had training disrupted by injury and work commitments and had no right to be at the start line, let alone near the finish. The finish clock ticked on. At 7:20 Kieran swept down the 1km finishing Boulevard that was flanked by bars to a rapturous welcome.

There was surely no hope for big Dave (the) Scott. We’d last seen him around 1pm on the Tourmalet, where Kieran and Paul’s families had kindly organised a splendid lunch for us comprising proper sandwiches and hot coffee. We’d left David there, slumped in a picnic chair with his bike lying in the road, muttering darkly. The clock ticked on to 7:40. No chance. Hang on, what’s that spec in the distance? A lone rider hove into view. It can’t be? Yes he’s wearing Yapp kit, the Saltire flapping wildly from the back of the bike. It was Dave, with 5 minutes to spare. Heroic. Spark wild celebrations. We’d all made it. 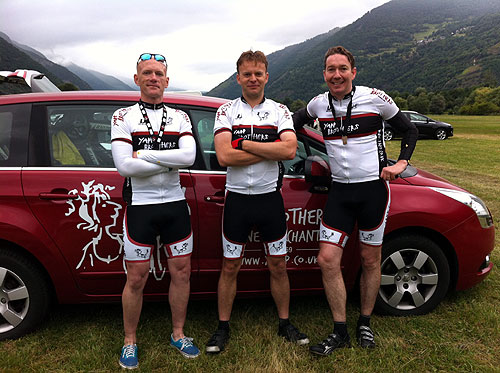 Epitaph: David’s adventure didn’t end there. Having wearily pushed his bike to the local train station to get a train back to his digs, he was told that the train wasn’t running as it was a public holiday (you’ve got to love the French!). He collapsed into a local bar to consider his limited options and the friendly patron offered him a room above the bar for the night. The spirit of Le Tour lives on!