The Bunch is a convivial group of wine merchants who got together in the early 1990s with a view to promoting the independent wine trade, protecting consumer interests (in the wake of some scandalous business failures) and enjoying each other's company over a few decent bottles of wine. The founding fathers have now all retired and, like an enduring rock band, there have been a few changes to the original line up but the intrinsic esprit remains. The Bunch convenes every September for an annual press tasting and once or twice a year to catch up and discuss issues of the day. The meetings are always enjoyable and informative but there is, perhaps inevitably, a certain one-upmanship as to the wine each merchant chooses to serve their peers. 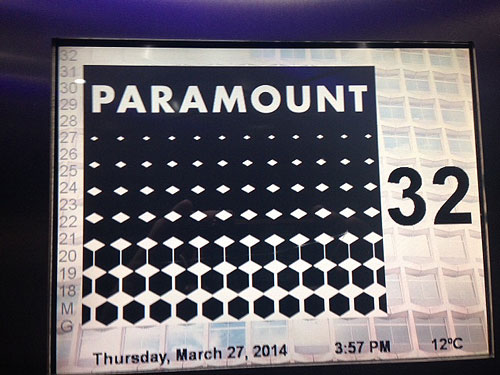 The Paramount: Lift Going Up...

Last week we all met up with some journalist friends for a tasting and lunch at the Paramount Club at the top of the Centre Point tower on New Oxford Street. If the views were impressive then so were the wines. The theme for the occasion was 'classic and innovative' with each merchant contributing a wine they felt fell into each category. Yapp Brothers opened the batting with our ‘classic’ offering - a Champagne 'Extra Brut' from J Dumangin Fils. This whistle-clean, growers' blend of 50% Pinot Meunier and 25% each of Pinot Noir and Chardonnay was very well received and primed our palates for the ensuing wines. Next up came Lea & Sandeman’s ‘innovative’ selection - a Castelli di Jesi Verdiccho Riserva Classico from Cantico Della Figura in the 2010 vintage. With lovely lemon and lime scents and a zesty, persistent palate this found immediate favour with the panel. James Tanner then treated us to his contemporary choice – an IGP Lazio Terre de Pallavicini ‘La Giara’ Malvasia Puntinata 2012 – another nervy, un-oaked Italian white of immediate appeal. Then, as some exceedingly fine starters began to materialise, Vicky William’s of Berry Bros. & Rudd fielded her traditional nomination – Yves Gangloff’s 2012 vintage of Condrieu. I am a sucker for Northern Rhône Viognier and this was earth-moving stuff. With a taffeta texture, bountiful white peach and apricot aromas and flavours and a haunting, ethereal finish, this is a benchmark example of the genre. There was some debate about when this wine would reach its drinking zenith but there was general consensus that it is delicious right now on its ripe, youthful fruit. Adam Brett-Smith of Corney and Barrow then indulged us with what he declared to be ‘the world’s least costly fine wine’ – Leflaive’s Macon-Verzé in the 2011 vintage. Exuding elegance and finesse (the wine not Adam) with a lovely mineral-edge nobody disputed his audacious claim! We rounded off a terrific flight of white wines with our innovative selection - Marc Angeli’s ‘La Lune’ 2012. A humble Vin de France, made from pure Chenin Blanc in Anjou, by a celebrated exponent of biodynamics. This sparked some lively discussion about the ‘Natural Wine’ movement which many of us felt was commendable in principle but rather too loosely defined. The wine itself had pleasant orchard fruit flavours and some interesting nutty nuances but was somewhat overshadowed by its illustrious competition. 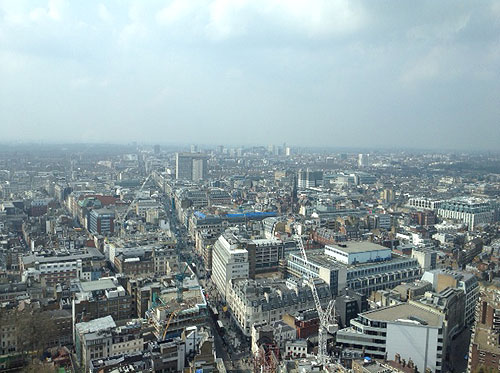 Room with a view

As our main courses arrived we segued on to a fascinating array of reds. First up was Adnam’s ‘innovative’ choice – another ‘Vin de France’, called ‘La 50/50’ made by a Burgundian couple in the Minervois from a blend of Grenache, Cinsault, Carignan and Syrah. This had both power and restraint with a wealth of garrigue berry fruit over a background of ripe tannins. I think this 2011 bottling will improve with bottle-age. It was followed by Adnam’s ‘classic’ red – the Cape Mentelle, Margaret River – Cabernet Sauvignon 1982, winner of the 1983 ‘Jimmy Watson Memorial Trophy’. What a treat – it wore its age lightly with bags of sweet fruit and soft, cedary tannins. This is what is great about the Bunch – the opportunity to taste really interesting wines and discuss them at leisure in good company. We then sampled Berry Bros’s ‘innovative’ offering – a lovely, spicy DO Ribiera di Sacra, Domino do Bibei ‘Lacima’ 2010. Being something of an ignoramus where Spain is concerned this was new to me but it is made from 100% old-vine Mencia and I commend it to you. 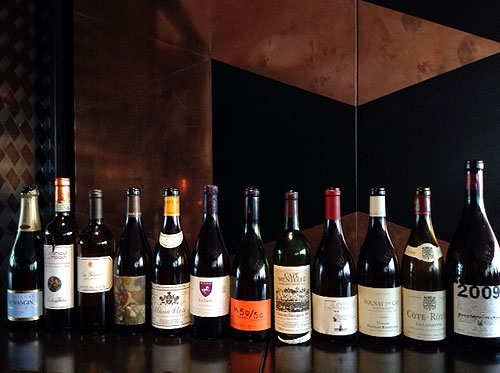 We were then in indisputably traditional territory with Charles Lea’s Volnay 1er Cru ‘Santenots’ 2009 from Nicolas Rossignol. We all liked this pedigree Pinot Noir with its pure fruit and fine acidity and balance but there was widespread agreement that it would improve with age and that there was a danger of these voluptuous 2009 Burgundies being consumed before they realise their full potential. On the home straight now James Tanner upped the ante with a bottle of René Rostaing’s sublime Côte-Rôtie ‘La Landonne’ 1999. A certain Mr Parker of Maryland once described this as ‘undoubtedly the greatest vintage he (Rostaing) has ever produced. A ‘Profound, full-bodied, muscular effort.’ Already drinking beautifully it still has many years of graceful aging ahead of it. Our final wine of this dazzling dozen was a sizzling Sicilian discovery from Corney & Barrow – the IGT Tenuta di Passopisciaro 2009, in magnum, from grapes grown 1000 feet above sea level on the edge of Mount Etna. Packed with bright cherry and berry fruit and underscored by a fine acidity this made for a suitably explosive finale to a great gathering.

Our conclusion? We should do this more often!