It is hard to believe that 5 years have already elapsed since Le Café Anglais first opened, in the Whitley’s building in Bayswater, bringing some welcome Parisian brasserie bravado and cool art deco influences to the metropolitan dining scene. Uncompromising chef-patron and FT food writer Rowley Leigh is a keen oenophile, as well as a creative cook, but although culturally-rich he is time-poor so it is extraordinarily hard to lure him away from his W2 stomping ground to attend wine tastings elsewhere. It is far better for the ‘mountain to come to Mohammad’ and to cajole him into sampling a few wines in his own restaurant; preferably over a languorous lunch. 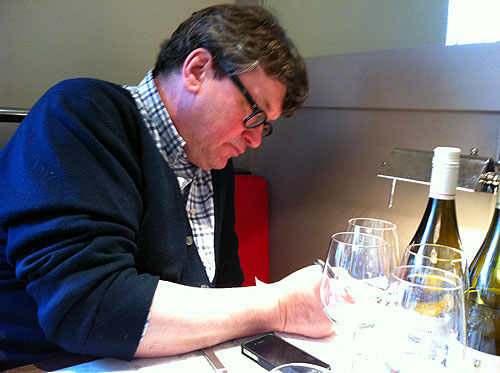 Thus it was Friday last that I found myself once again in the company of this gastronomically-gifted polymath as he discoursed on topics as diverse as how to make a sauce Amercaine, the prospects of Paris Saint-Germain vs. Marseilles at the Parc des Princes this Sunday, the later works of Marc Chagall and where to dine in Barcelona. Anyone who witnessed his virtuoso performance on University Challenge – the Professionals will recall that Rowley would be an asset on any pub quiz team; if you could possibly persuade him to spare you his time.

I am sure that someone gave me a menu to look at as I gathered up the bottles we were to sample but it seems invidious to order from a menu one’s host has devised so, as ever, I let Rowley order on my behalf. Happily he is aware of my predilection (bordering on addiction) for pike boudin, which is a notoriously difficult dish to make, but a marvellous foil for white Northern Rhône wines, so he indulged me there. 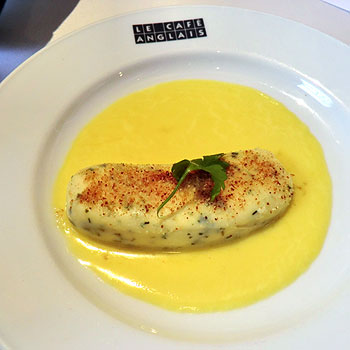 We kicked-off our tasting with an unusual, white Vin de Pays from the Ardèche, made from a blend of Grenache and Sauvignon, that worked pretty well as a zesty palate-primer, and followed it up with an elegant Jacquère from the Savoie and a whistle-clean Menetou Salon from the ever-reliable Domaine Jean Tieller. All 3 wines accompanied the pike without embarrassment but it was Alain Graillot’s inimitable white Crozes-Hermitage that really lifted it onto a more hedonistic level.

We were then served a gorgeous game terrine (containing 2 teal, 3 pheasant and a woodcock) that went wonderfully with a juicy, old-vine Beaujolais Villages served at cellar temperature. That, in turn, was followed by Fredrik Filliatreau’s 2011 Saumur Champigny and a blameless 2009 Bordeaux Superieur from Château d’Abzac as we segued on to a rack of lamb braised with lentils and carrots.

A trio of bold, chest-thumping, southern reds, from the Minervois, Pic Saint-Loup and Bandol respectively, were paired with Mrs Kirkham’s sublime Lancashire cheese and Jamie Montgomery’s equally meretricious mature Cheddar. We then had a soupçon of Pascal Labasse’s Jurançon mœlleux as a decadent digestif and a token espresso to put a cap on proceedings.

As I’ve said before: ‘It’s tough work but someone has to do it’. I left the Café Anglais, as always, with a deep sense of contentment. Not least for having counted 6 bold ticks on le patron’s tasting sheet. I’ve a feeling it won’t be long before I’m back from more of that pike boudin that really is an excuse to visit number 8 Porchester Gardens in its’ own right!