Long before I met my wife she belonged to a Wine Club in Cardiff, not that I think really this was for genuine oenophiles but more of a social club where the cheese got as much attention as the wine. It was though by all accounts great fun and had a loyal following.

At one such gathering she was persuaded to buy a bottle of Chapoutier Côte Rôtie 1996 (for what was then an unusual concept – drinking at some point in the future). This bottle has been with us now for more years than I care to mention, moved house with us and still with its hand written sticker “DO NOT DRINK UNTIL 2010”

It’s been an ongoing debate – as 2010 passed, when would we actually drink this single bottle?

Last weekend we had friends round, a normal drill of each couple bringing one of the courses – Richard decided on Beef bourguignon (after a few errors with a beef wellington earlier the previous day) – so we decided that we may as well finally drink the CR96. 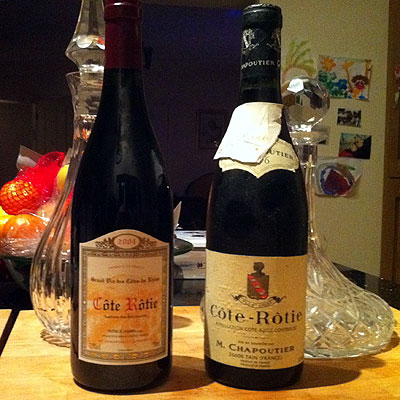 It felt like my Chemistry A level practice all over again – I knew the theory – now it was time for the real thing. We decided on a face off – we lined up a Jasmin Côte Rôtie 2004 to ‘compare and contrast’ – well, following the science A level reference – more an experiment control. So, having asked (one of) our resident Rhone experts at Yapp HQ I was ready.

We kept both bottles outside during the day – it was 12-13 degrees, so ideal – warmer than chilled whites but cooler than normal red serving temperature. We decanted (with military precision) both bottles 1 hour before serving the Beef bourguignon. 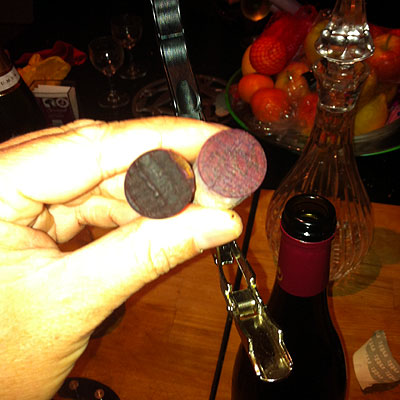 The 1996 on pouring was thinner and browner that the 2004 –and on decanting had hardly any nose. The 2004 however had a classic Northern Rhone nose - a bouquet of raspberries and violets and a palate of dense black fruit flavours and ripe tannins.

However, an hour later the 1996 had literally blossomed – and now in comparison was way in front – always reassuring when your revision comes good in the exam!

The 1996 Côte Rôtie was devoured by all at the table, it was delicious and had a finish that was seemingly never ending.

Should you want to repeat this at home (we had great fun doing it) you’ll find our selection of Côte Rôtie wines here.