When I was demobbed from University in the late 1980s with an ill-deserved 2.2 in Social Policy & Administration (I know – no wonder they introduced fees) the country was in the midst of an economic downturn (plus ça change) and, in desperation to secure the £40 per week rent for my box-room in Brixton, I found employment in the monolithic Surrey Street offices of Arthur Andersen's Management Consultancy at the Temple. Not as a highly-remunerated graduate trainee I must stress. I took on the more humble position of fax delivery person. The premises were so vast that it was (almost) a full-time job to distribute incoming 'facsimiles' throughout the building. Of course, it was deadly tedious and poorly paid but it kept me fit and off the streets and I had licence to be pretty much anywhere within the confines at any given moment. Thus I spent my time mooning about reading other people's 'Top Secret' correspondence and admiring Arthur Anderson's extensive modern art collection that was liberally distributed throughout the building. I had a particular penchant for the Glen Baxters, of which they had several, with their hilarious ligne claire portrayals of uncles sawing their legs off and girl guides with hand-grenades. Happily the job didn't last – Oddbins lured me away from the red braces brigade but my Baxter-fandom was set in stone. 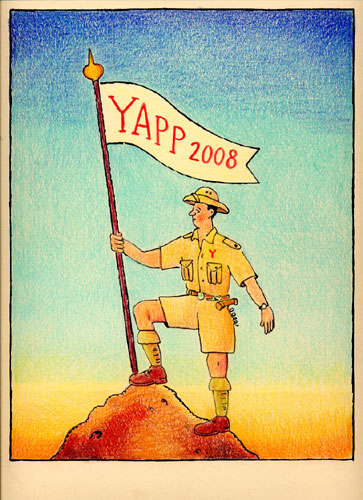 They say you should never meet your heroes but I suppose there is an exception to prove every rule. Decades later after a long lunch in the Academy Club in Soho (me not him) I was introduced to Glen and after several minutes of unavoidable gushing managed to engage him in something akin to conversation. It transpired that he was a keen Francophile and oenophile with a wealth of knowledge about Gallic gastronomy and tradition. In short we found we had lots of common interest and over the course of a few more lunches I managed to cajole Glen into illustrating our 2008 wine list. 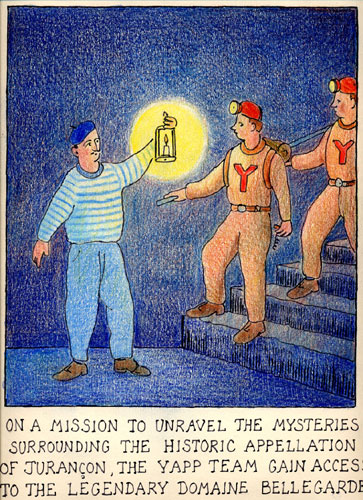 The results were spectacular, a wonderful comic-strip narrative of the Yapp brothers wine-seeking adventures in darkest viticultural France. Happily Glen is still susceptible to the lure of a glass of Condrieu and some quenelles de brochet or a bavettes frites and a bottle of Pic Saint-Loup and thus it is that I have managed to persuade him to come to the aid of the party once more and illuminate our forthcoming 2014 catalogue. Anyone who doubts the affinity between wine and art should look no further. 'Facsimile for Mr Baxter!'

You can find more information about Glen Baxter on his website here. 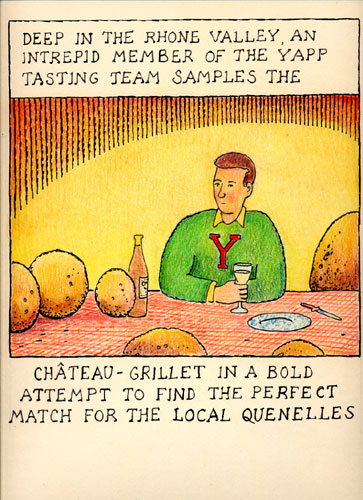