One of my default dishes at Easter time is ‘Lamb Boulangère‘ or ‘Épaule d’Agneau Boulangère’ to give it its full French title. It can be prepared in advance and is simplicity itself to cook so wins on those counts. It is also seasonal, tasty and good for feeding quite a large family gathering – hence its’ enduring popularity.

The name derives from the days when village housewives would prep the dish up early in the morning before dropping it off at the local bakers en route to mass. It would then slow cook in the bread oven for a couple of hours before being repatriated for a post-Benediction Sunday lunch. I like to think there is some corner of La France Profonde where this archaic ritual still takes place and if there isn’t then somebody should revive it.

I’ve cooked this dish so many times I don’t use weights or measures so all my figures are rough estimates. This isn’t cooking that requires precision.

I use a de-boned shoulder of local lamb weighing at least a kilo if I am feeding four people and two if there are 6-8 people dining. I stud the lamb liberally with rosemary and garlic before coating it in olive oil and seasoning it with sea salt and ground pepper. The dish requires roughly twice the weight of potatoes to meat and I favour Maris Pipers as a variety. You peel and thinly slice the potatoes before loosely layering them in a large rectangular roasting dish along with 2 or 3 finely sliced (medium sized) Spanish onions, a few sprigs of thyme and a few pinches of finely chopped rosemary and garlic.

You then pour the stock over the potatoes and onions and season them with salt and pepper before placing the lamb on top. That ensemble then goes into a pre-heated, fan-assisted oven at 180 degrees C. for an hour. You then remove the dish from the oven and turn over the lamb and any of the onion and potatoes that look like they are in danger of charring. Return the dish to the oven for 20-30 minutes and then turn the oven off and let it rest for a further 20-30 minutes. 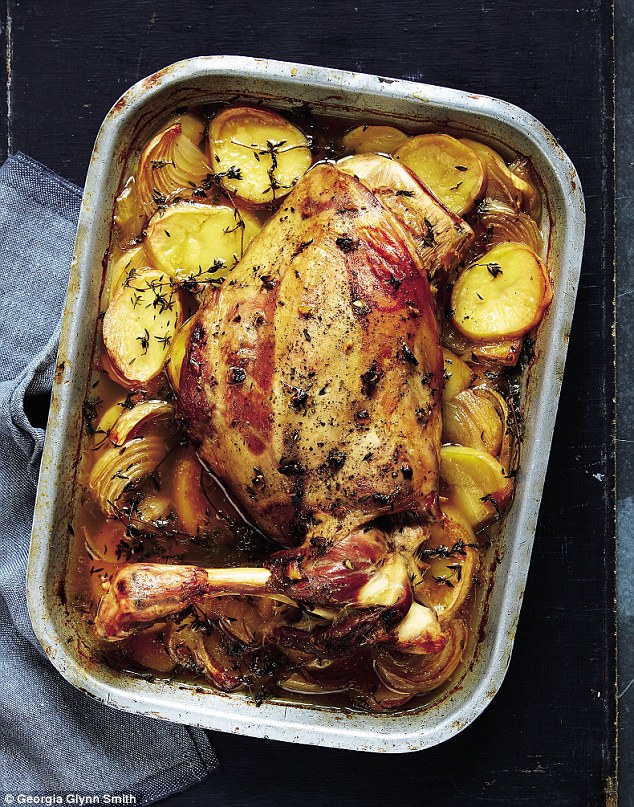 I would serve that with steamed broccoli or green beans and pair it with a full-bodied, life-affirming southern French red – this month’s organic Côtes du Roussillon ‘Tradition’ 2016 from Domaine Ferrer-Ribière would be ideal.