[Season 2 Transcript 'Bossy Boots', October 2000]
• SpongeBob: "Two... sa-lads. Never heard of it. I got to stay hip. I don't want to end up like silly old Squidward. But what in the name of Davy Jones' locker is a sa-lad?"
[cut to SpongeBob walking up to Pearl with a tray with two Krabby Patties]
"Here you go. Two sa-lads."
• Pearl: "Ew, gross. Those aren't salads. Take those back. Remove the bun, the patty and the condiments."
• SpongeBob: "But that just leaves the lettuce and the tomato."
• Pearl: "Exactly." 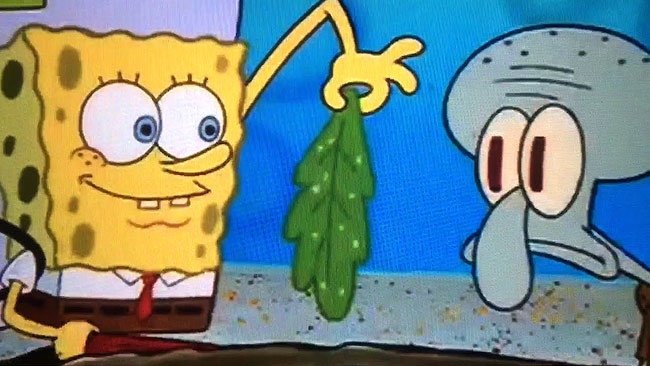 Much like my hero SpongeBob SquarePants ('Bob l'Éponge' in France) the concept of salad doesn't set my pulse racing. I've always averred that the best salads are the ones that contain as much protein and carbohydrate as possible. Even I concede that in high summer salads have a place in the culinary repertoire. Here are two of the best.

Caesar Salad
Ironically, considering it alleged to have been knocked-up in extremis by Caesar Cardini on 4th July 1924 when he was running low on ingredients at his eponymous restaurant in Tijuana, Mexico, nothing divides opinion in the food fraternity than what ingredients should (and shouldn't) be in a Caesar Salad. Extensive research has revealed that this is the definitive recipe:

Mix the oil, garlic, anchovies, mustard, lime juice and half the Parmesan in a large bowl until amalgamated, then add the egg yolks. Gently roll the Romaine leaves in the dressing until well-coated then add the croutons, the rest of the Parmesan and salt and pepper to taste before serving.
Purists would consider it sacrilegious but if you wanted to beef that up into a more substantial repast you could add two sliced grilled chicken breasts.

Salade Niçoise
In her seminal 'French Provincial Cooking' [1960] the doyenne of food writers Elizabeth David averred that a vrai Salade Niçoise should be "a rough country salad, rather than a fussy chef's concoction"; which is a promising start. Her core ingredients are a bed of lettuce, halved hard-boiled eggs, quartered tomatoes, anchovy fillets, black olives and capers which should be dressed with an amalgamation of fruity olive oil, tarragon vinegar, salt, pepper and a crushed clove of garlic. Her list of suggested additions (rather dated by the first) includes: "Tunny fish, cooked French beans, raw, sliced, red peppers, beetroot, potatoes and artichoke hearts." With the possible exception of the beetroot I tend to adopt a maximalist approach and bung everything in, in generous quantities. Small, waxy Charlotte potatoes hold their shape well and provide welcome ballast. The finished article looks surprisingly appetising served in a large, shallow bowl or bowls that can be passed around as people serve themselves. 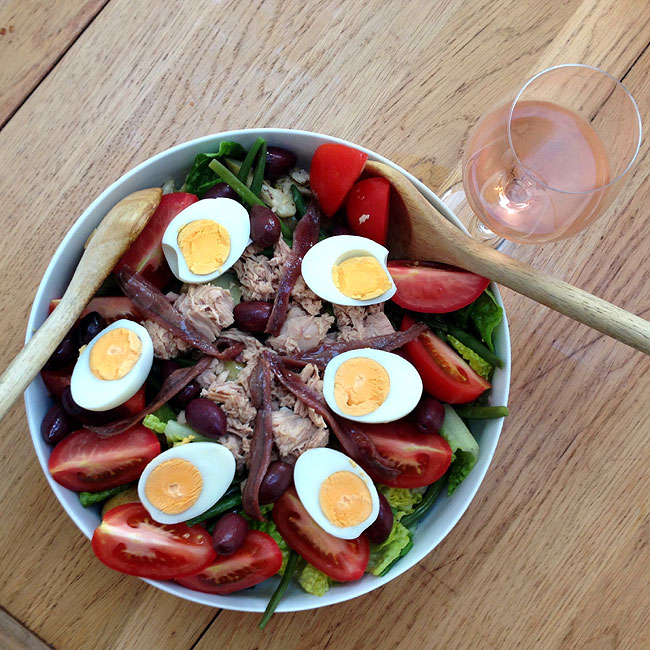 Hopefully the weather will be clement enough to serve those outdoors, in which case I would pair them with a well-chilled rosé such as this month's Coteaux du Cap Corse: Domaine Pieretti Rosé 2016.