When in need of culinary inspiration, I regularly find myself turning to Elizabeth David's range of cookery books handed down to me by my late father (each inscribed by him with the foreboding words 'Not to be removed from Maison Ashworth'). Whether this meant his house, or it's a supernatural warning from the other side, I am never quite sure, but I am loathe to test the curse.

In any case, I fancied that Liz would have something to say on the Basque dish of Pipérade in French Country Cooking (1951) and I wasn't disappointed. I have enjoyed Pipérade in situ at both Domaine Illarria and Domaine Bellegarde (the latter is technically Béarn, but gastronomically very similar) and it's simple to knock up. You sweat garlic, onions, tomatoes and choricero peppers (green or red according to FCC) to a mash, then stir in beaten eggs and lightly cook. 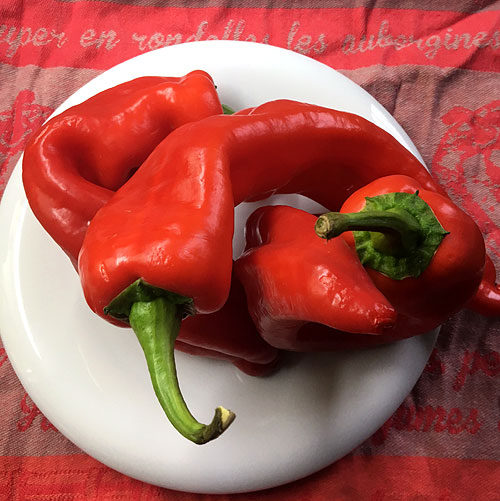 In my opinion it should always be accompanied by Bayonne ham, although FCC also recommends brochettes of calf's liver and I've been served it successfully with andouillettes. Assuming you're not enjoying Pipérade as a hearty breakfast, a classic match would be Peio Espil's white Irouléguy made from Petit Corbu and Petit Manseng, which has sufficient weight to cope. 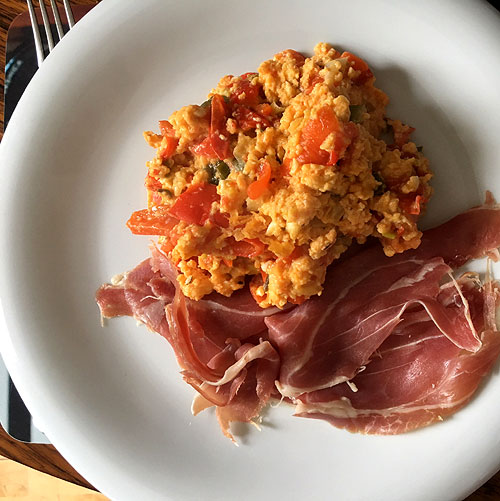 While sweating the vegetables, I used my time to read Liz's short introduction to FCC and was amused to find her observation that:
"Rationing, the disappearance of servants, and the bad and expensive meals served in restaurants, have led Englishwomen to take a far greater interest in food than was formerly considered polite;"

Times have changed since 1951, but the dishes haven't aged.