A consummate master of self-reinvention Jamie Oliver's magnificently minimalist '5 Ingredients – Quick and Easy Food' topped the best-sellers list in the UK last year. It wasn't the best-selling cookbook, it was the best-selling book bar none; shifting an astonishing 716,071 hardback volumes.

It's premise is simple (as the title suggests) each recipe uses only 5 key ingredients. It does take a few liberties with condiments and the hugely repetitive 'season to perfection with sea salt and black pepper' begins to grate after a while but it is an ambitious undertaking and seemingly impeccably researched. 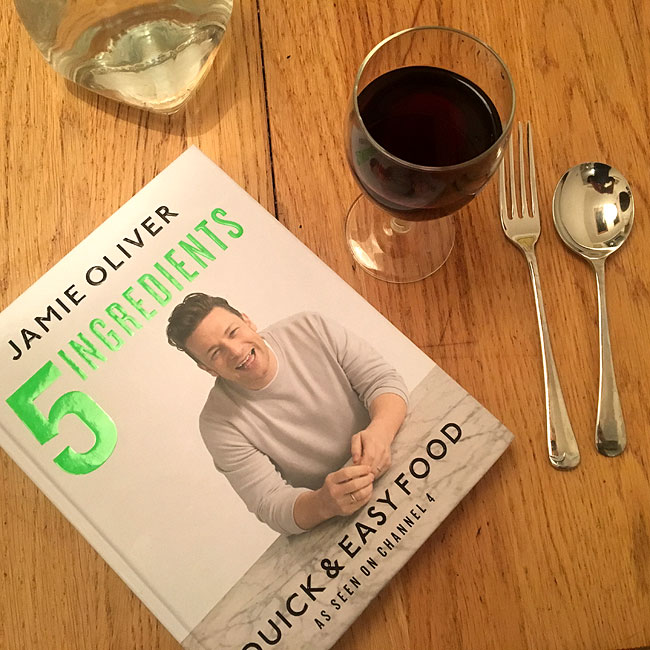 With a 19 year-old who needs to extend their culinary repertoire before (hopefully) going to university in the Autumn it seemed like a good starting point for £26. It is very simply divided into sections on 'Salads, Pasta, Eggs, Chicken, Fish, Veg etc.,' and each dish is beautifully photographed on the right hand page. The recipes are very easy to follow and, perhaps inevitably, a bit basic but the key thing is they work. It is a book that should get people who aren't habitual cooks into the kitchen and will provide plenty of inspiration for more seasoned chefs who are time poor.

The first dish I had a crack at was 'Italian Baked Rice' which required 300 grams of Arborio risotto rice, 2 onions, 60 grams of fennel salami, a heaped tablespoon of mascarpone and 40 grams of Parmesan. It was a doddle to prepare and was on the table in under an hour. It was hot and filling and nobody complained. With a glass of this month's Rasteau it might even have been deemed cheering.

Some of Jamie's geezer-ish nomenclature can be irritating (the dedication to his flamboyantly monickered progency in the front is hilarious) but overall I think he is force for good - questing and talented in equal measure.