Now that my beloved (and vegan) progeny have departed to their seats of learning and the proverbial nest is empty (and tidy!) I look forward once more to roast chicken. I favour a simple recipe with lemons, for which I think Marcella Hazan is the fons et origo but I have cooked this so many times it is many years since I referred to the original text.

Like Yotam Ottolenghi, I revere lemons more than any other ingredient and it is easy to forget they were completely unavailable on these shores as recently as the Second World War. In Tudor times they were considered so exotic that the Company of Leathersellers splashed out 6 silver pieces for a solitary lemon in 1533, as the centrepiece for a banquet for Henry VIII and his new squeeze Anne Boleyn.

I’m eating less meat these days so if I am cooking chicken I buy a free range organic one which I think justifies the expense. Contemporary cooking advice is not to rinse poultry but I’m a creature of habit so still do so while pre-heating a fan oven to 180°. I anoint the oven ready bird with some olive oil and season it liberally with sea salt and ground pepper before adding 4-5 cloves of garlic and two small (or one large) pierced unwaxed lemons to the body cavity and sealing it off with a wooden cocktail stick. 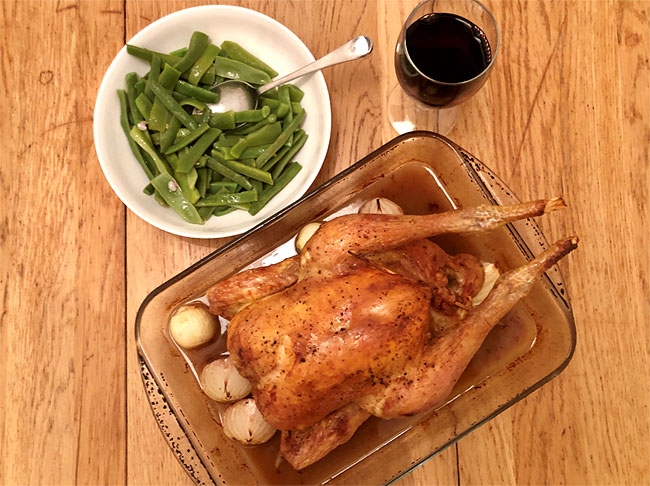 I cook that on its back for 45 minutes before turning it over at half time and adding half a dozen small onions and a couple of glasses of light red or white wine to the roasting dish. At this point I also add a second dish to the oven of peeled, roughly chopped maris piper potatoes dressed with olive oil, salt and pepper and rosemary.

I let everything cook for a further 45-55 minutes during which time I lightly steam some broccoli, spinach or green beans as a counter-point to the carbs and protein. If I’m feeling indulgent I’ll also add some bread sauce the production of which I out-source to my sister if she’s in town.

To finish I pour the un-thickened juices in a gravy boat, carve up the rested chicken, put the potatoes in a pre-warmed bowl and let people serve themselves at the table. This is comfort food for relaxed dining. Wine wise I’d be drawn to a fruit-accentuated white or supple mid-weight red. This month’s Pinot Blanc or Bourgeuil would be perfect.