My mantra in the kitchen is 'keep it simple' but this month's late summer recipe is the exception that proves the rule as it is quite an ordeal to prepare. To that end I tend to process it in stages starting the previous evening and re-visiting it throughout the day. As with most dishes which involve an element of self-assembly it is an unashamed crowd-pleaser and is great for entertaining family and friends. 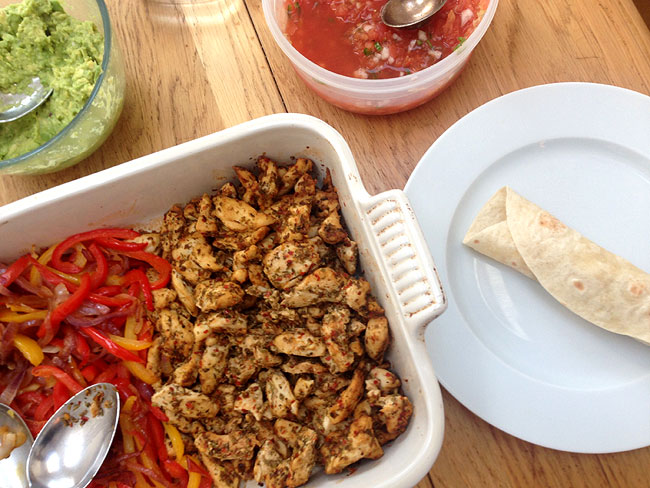 Guacamole
3-6 ripe avocados depending on the number of diners.
Lemon = juice of 1+.

I always start off with the marinade which involves pounding the crushed chillies, oregano, cumin seeds and peppercorns with a pestle in a mortar. When they are sufficiently pulverized I add the garlic and crush that up then the juice of at least one lime and a good slug of olive oil to make a thick, aromatic paste.

The chicken then needs to be cut up into really fine strips before being liberally coated with the marinade and left in a hermetically-sealed container in the fridge. 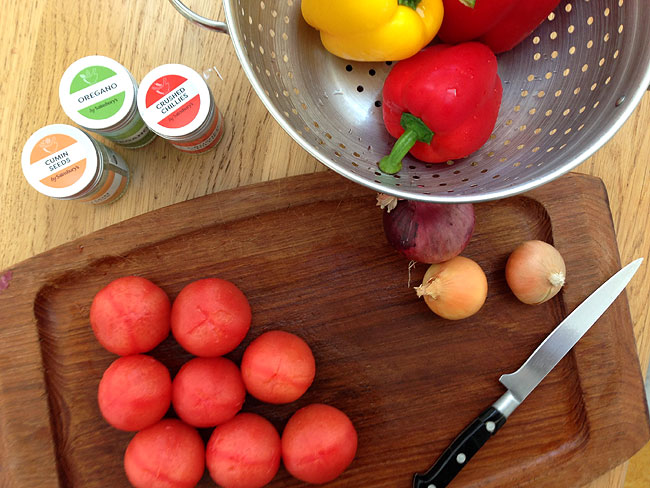 The next thing to do is prepare the salsa which involves peeling and seeding the tomatoes which is fiddly. (A close acquaintance swears this is unnecessary but I disagree). This task is made easier if you plunge the tomatoes into boiling water for a couple of minutes so that their skins yield more readily. Once peeled and seeded the tomatoes can be finely chopped and mixed with the other salsa ingredients before being placed in a container in the fridge until an hour or so before serving. 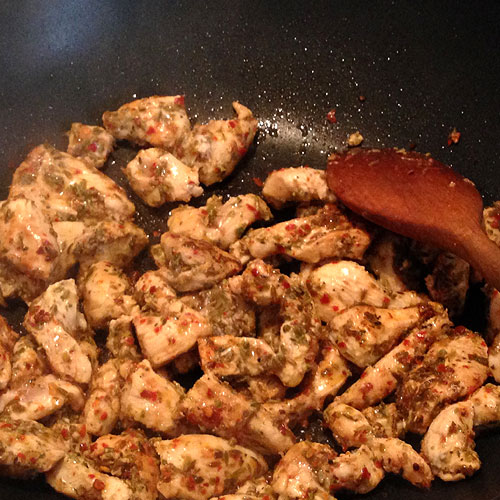 About an hour before the meal needs to be served I heat a large casserole dish in a low oven before batch frying the marinated chicken in a wok until it is nicely cooked and starting to colour. When the chicken is cooked I keep it warm in the oven before setting about the peppers and onions. These need to be finely sliced into strips (not chopped into dice) and gently fried in olive oil until they are soft and cooked through. I then put these in the oven with the chicken.

At this point you can make the guacamole by mashing up the avocados with the juice of a lemon and adding a couple of large spoonfuls of the salsa. I tend to leave this until the end as I think the fresher it is the better – there's little worse than brown guacamole. Now you can place a bowl of sour cream on the table and warm the tortillas in the oven. I then put everything on the table so that people can serve themselves. There are no hard and fast rules about the order of play but I start by giving a tortilla a good smear of guacamole, then adding chicken, then peppers and onions, then salsa, then sour cream. Perfecting a good 'fold' – left side in, right side in, bottom flap up - makes for more elegant consumption but this is 'dig in' dining not haute cuisine.

There is a good argument for just serving cold beer with this dish but I think rosé marries really well with chilli heat and so would opt for something chilled, pink and herb-scented such as this month's Tavel – the last of the summer wine!