Our founder Robin Yapp is well known for having original ideas and putting them into practice. I wouldn’t say he was impetuous but he certainly has the courage of his convictions and is capable of taking quite a long-range outlook. Thus it was in the early 1970s when he decided our courtyard was lacking a certain je ne sais quoi that he commissioned (at eye watering expense) a replica of the famous fountain in the centre of Châteauneuf-du-Pape - to be hand-carved and installed here in Mere. 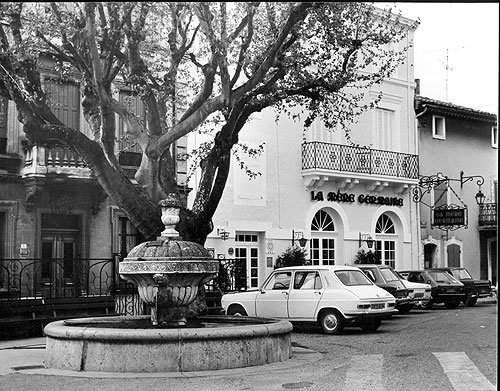 The fountain at Châteauneuf-du-Pape

I remember as a small child quite a bit of fuss and excitement prior to its unveiling and then daubing the dressed stone with natural yogurt to help induce a bit of mould and lichen. Over the years it has brought pleasure to many visitors who like to sit beside its babbling spouts and enjoy a contemplative glass of wine at our café tables. It is now such a centrepiece of our premises that it is hard to imagine life without it. 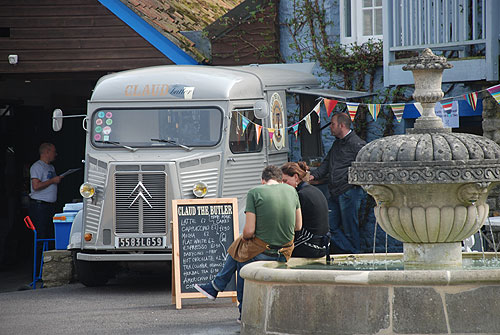 Unfortunately our winters are harder than those in the Southern Rhône and over the decades we’ve learnt a lot about fountain conservation and the perils of hard frosts on limestone. Happily we’ve stayed on top of the situation and until recently could boast that our jolly folly was in as good as condition as ever. 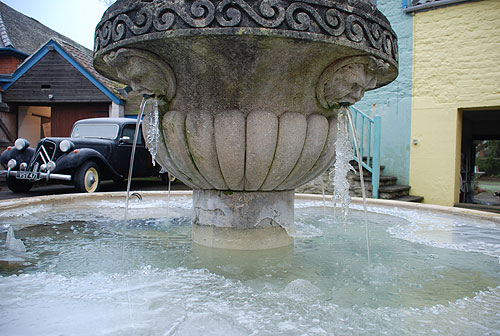 Last December however, a customer of ours, who shall remain nameless if not shameless, reversed their car into the basin wall of the fountain with such force that the stones fractured and parted.

The result of the impact left more of a ruin than a water feature and after the mandatory calls to stone-masons and insurers we began the long process of restoring the status quo.

Stone carving and setting is a highly-skilled craft and we were thrilled when local stonemason Harry Jonas (www.harryjonas.co.uk), who had helped with repairs 15 years previously, agreed to undertake the job. Harry and his team arrived on site at the beginning of the week and are now putting the finishing touches to a pain-staking restoration.

To use an analogy that Robin might relate to it looks as if our courtyard has had its broken teeth fixed and got its smile back. Just in time for us to break out the agapanthus and enjoy a refreshing glass of rosé in the sunshine!