We have been tracking the rising interest in Jura wines for some time, tasting them whenever we could and awaiting an opportunity to visit this unspoilt region on France's eastern frontier. Our chance arrived just before Easter, as we found ourselves only an hour away in Beaune for the Grands Jours de Bourgogne and decided to head to Arbois for some recon. 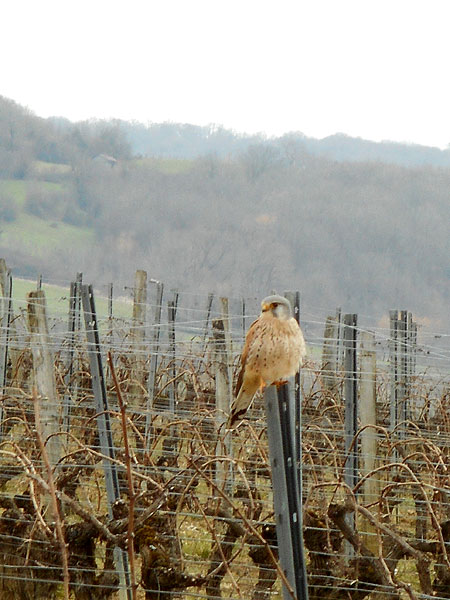 A kestrel hunting among Jura vines

What are the wines about? These inimitable wines are fascinating, but require approach with an open mind. In brief, the traditional whites from the Savagnin grape are sherry-like (if the barrels are not top-upped), while the reds (Poulsard and Trousseau) are light in colour, fruity and elegant rather than rich. Fans of cru Beaujolais or lighter Pinot Noirs would appreciate them. They also produce very decent sparkling Crémant from Pinot Noir and Chardonnay, plus tiny volumes of deliciously sweet vin de paille (from grapes that have dried in lofts over the winter). As one might expect, the wines are at home with the dishes of the Jura – reds with morteau sausages, whites with Comte cheese, none more so than Vin Jaune, aged for 6 years and 3 months before release and served in its unique 62cl bottle called a clavelin. The Jura is proud of its heritage (especially its most famous son, Louis Pasteur) and has heroically defended its wine culture – in 1973 its winemakers descended on Strasbourg armed with clavelins and 15kg Comte cheeses to see off the threat of the EU harmonising bottle sizes. 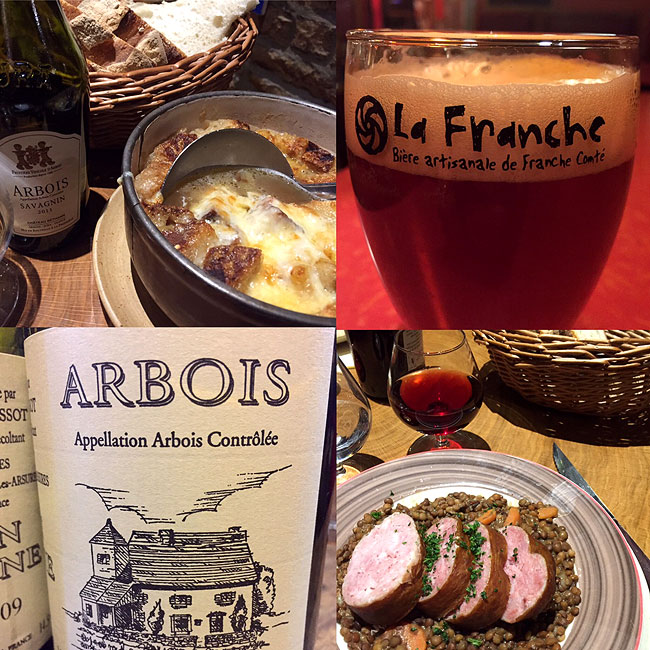 A light repas of onion and Comte soup, followed by morteau and lentils

If you wish to know more about this region and its wines, Wink Lorch's detailed book 'Jura Wine' is the absolute bible. Otherwise, watch these webpages for new arrivals!