Lording it up at Lords of the Manor

We used to do this sort of thing a lot B.C. (before children). Jason would be booked in to give a wine talk and I’d accompany him for a luxurious night out. Work for him, play for me.
Our lives are busier now and the headache of farming out kids with hectic schedules and needy dogs tends to put me off going along. But this time we decided that it would be worthwhile and as the wine dinner was on a Friday night and not too far away we could cope with the byzantine arrangements.

Lords of the Manor (http://www.lordsofthemanor.com) is a country house hotel in the old style - a beautiful 17th Century Cotswold stone rectory in the ominously named Upper Slaughter.
The staff are friendly and helpful (just about the most important part of the experience in my mind), the rooms beautiful and comfortable – neither chintzy nor self-consciously cool. Speaking of which, they weren’t overheated either. The dinner was billed as a Rhône wine evening and unusually the menu was designed to compliment the wines rather than the other way around. Jason had just given a Rhône masterclass to the Hotel du Vin sommeliers the previous week so I urged him to ease off the technical aspects and give some interesting anecdotage.

We were warmly welcomed by manager Paul Thompson and served with a delicious aperitif of Saint Péray Mousseux: Jean-Louis Thiers which was accompanied by lovely (tiny) fish and chip canapés. After being seated in the elegant dining room we moved on to the silky smooth Viognier ‘Le Pied de Samson’ 2010: Georges Vernay which was served with a delightful bosky white asparagus, artichoke puree, cep confit & cep velouté appetiser topped with a poached pheasant egg (not something I often rustle up at home). Jason gave his introduction to the first two wines to a very appreciative audience.

As the evening moved on we progressed through a sumptuous menu devised by Michelin-starred chef Matt Weedon and accompanying wines: roast salmon with Alain Graillot’s 2010 Crozes Hermitage Blanc, duck with Châteauneuf-du-Pape: Domaine du Pere Caboche 2009, Côte Rôtie 2006: Jasmin with an interesting cheese Beignet and finally Muscat Beaumes de Venise 2009: Domaine de Durban with a classic Tarte Tatin and vanilla ice cream. It sounds like a menu that would challenge Mr Creosote but the portions were dainty enough to enjoy every course. We skipped the coffee and petit fours and propped up the bar with a friendly group of guests before retiring to our commodious room.

It was a real treat and certainly beats the usual Friday night pizza. Hope I don’t have to wait ten years for my next trip! 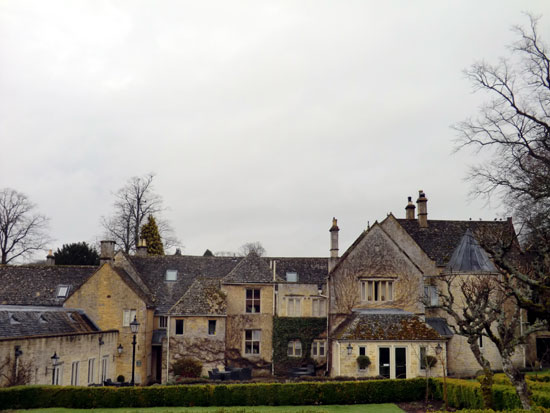