As one of the most underrated regions in France, the Loire valley still attracts many wine lovers. At Yapp Brothers, we never had a doubt of its full potential as we have been importing a large diversity of styles from the region since the 1960's. The Touraine sub-region is the cradle of Cabernet Franc, a grape that has thrived there for over three centuries. From its original name Bouchet, it has flourished as the most planted one in the Loire as well as a key component of many great Bordeaux blends, boosting its popularity in other wine regions around the world. It's my firm belief that the best Cabernet Franc terroirs remain in the Loire and more especially around the town of Saumur and Chinon. Most wines there are packed with freshness and fruits aiming to be drunk young but a few winemakers see the potential to produce more structured, complex and age-worthy wines, especially on the clay and tuffeau limestone soils. 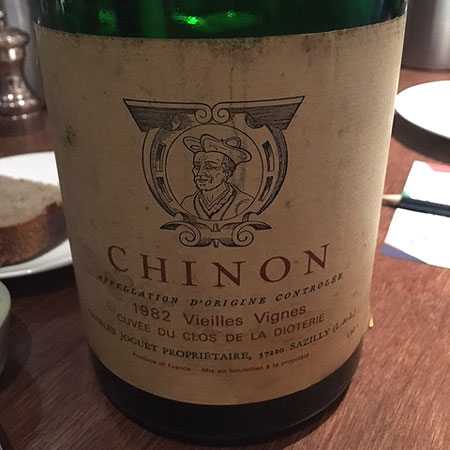 Understand my excitement when I recently received an invitation for a private wine dinner at 'Portland' with a generous vertical line up of top-producers' Chinon from 1982 to 1990, most in magnums. What better way to taste these gems than around a table of a dozen wine lovers and professionals, along with some delicious cuisine from a Michelin starred London restaurant! The first pleasant surprise of the evening was a glass of dry Jasnières 'Cuvée Calligramme' 2010 from Eric Nicolas, a round, well balanced Chenin Blanc with a refreshing palate of orchard fruits. We started our dinner with an epicurean matching of charcuterie and a Charles Joguet's Chinon from 1982. Moving onto the next wines (see below), we had the chance to taste various starters such as the 'Husbandry School Salad' (40 different herbs), the salsify with hazelnuts and aged Challerhocker or the lamb croquettes. After all these years, not a single wine had a fault and they were all pairing with the dishes in a very pleasant manner. A sublime cod 'en papillotte' was then served to us along with simple sides of roast potatoes, wild mushrooms and heritage carrots. Fresh, simple and well made, it was a perfect main dish to focus on tasting the last three wines we were poured. To complete this festival of food and mature Cabernet Francs, we ended on a sweet note with a light pear and almond tart slice. My favourites of the evening were without hesitation Clos de l'Echo Couly Dutheil 1985 for the intense layers of complexity, and Baudry Les Crezeaux 1988 for its remaining freshness and structure. I'll remember this dinner as one of the most beautiful vertical tastings I've ever had, within the right context and environment.

Looking to fill your cellar with some Cabernet Franc from the Loire? Our Filliatreau's Saumur Champigny Vieilles Vignes 2014 will cellar well for a decade or two!