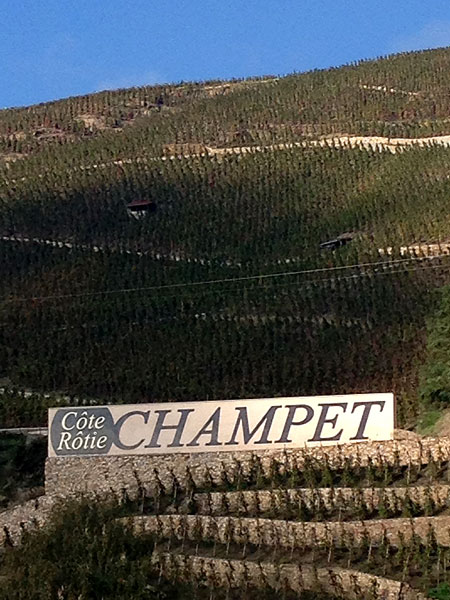 Having left home at an unearthly hour to catch a 7am flight to Lyon we touched down in chilly mists. after an hour's drive south to Ampuis the clouds parted and we were treated to a vista of vines in glorious sunshine. On the steep La Viallière vineyard to the North of Côte-Rôtie we found Joël Champet hard at work at the controls of a digger clearing the last viable 100 square metre plot below his house to accommodate a few more precious rows of Syrah vines. 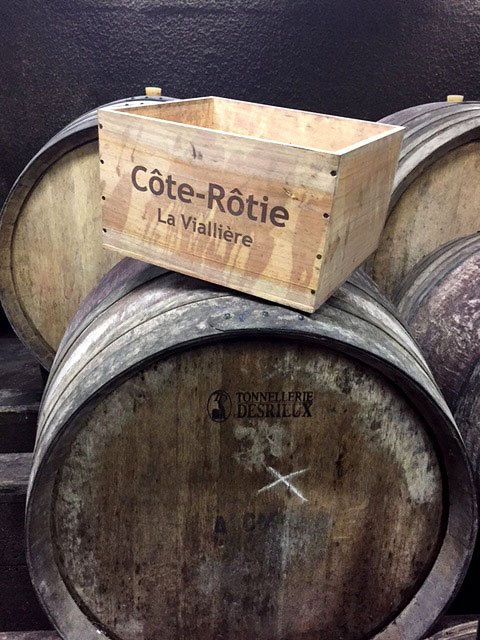 Joël was hugely upbeat about the potential of the recent 2015 harvest (the best he can remember) and keen to show us his latest 2014 bottling. By contrast the 2014 vintage was 'hard work all the way' but that toil was worth it as the finished wine is bien classique with pure black fruit scents and flavours and fine tannins offset by a mineral streak. It will drink well on its youthful fruit but should cellar well for at least 10 years. 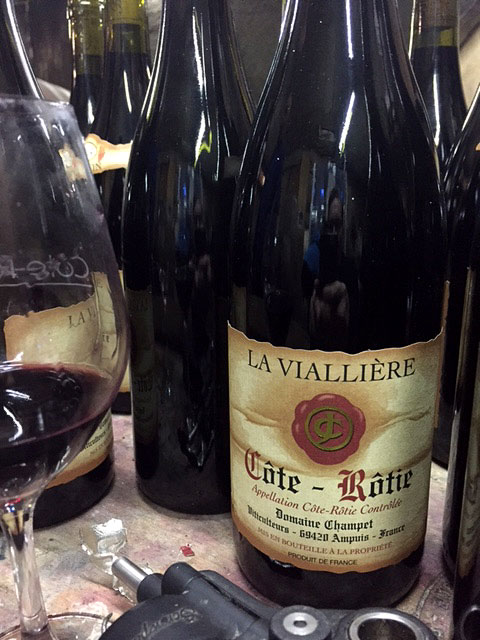 Down the road in Condrieu, Paul Ansellem, gave us a warm welcome at Domaine Georges Vernay. Here the 2014 vintage brought quality but also some much needed volume after terribly 'short' vintages in 2012 and 2013. The first bottlings of the 'Pied de Samson' vin de pays Viognier and 'Les Terraces de l'Empire' Condrieu are already drinking delightfully with bags of ripe white peach fruit, taffeta texture and great finesse. There is every reason to anticipate that the senior bottlings of 'Chaillées d'Enfer' and 'Coteau de Vernon' will also be benchmark examples of what this celebrated estate can produce. Not to be overlooked are Christine Vernay's terrific red wines. A delightful vin de pays Syrah 'De Mirbaudie' 2014 had lots of crunchy red fruit, a fresh acidity, supple tannins and the signature Vernay elegance whilst the 2013 bottlings of Saint-Joseph and Côte-Rôtie showed even more complexity and promise. The only disappointment here was that yields were low again in 2015 so lovers of premium Viognier should stock up on the relatively plentiful 2014s while they can. Don't say we didn't warn you!

Our final tasting of the day was back in Côte-Rôtie with our old friend Patrick Jasmin. We loved his youthful 2014 vin de pays Syrah called 'La Chevalière' which had lovely clean redcurrant fruit flavours but failed to persuade Patrick to part with a few cases as it has all been snapped up by canny locals. He has promised us an allocation next year though so watch this space. Barrel samplings of his 2014 Côte-Rôtie revealed all the components of a well-structured Jasmin assemblage - a lovely purple robe, dark cherry and berry scents, a wealth of black fruit, pitchy tannins and a fresh acidity. It won't be a blockbuster but more of a Burgundian-style, mid-weight wine for gratifying drinking with between 5 and 15 years of bottle age. After checking in to our favourite ( and inexpensive) hôtel, Les Deux Coteaux, we repaired to 'Le Chaudron' restaurant which is renowned for its fantastic list of Rhône wines. Happily we then bumped into our old friend and mentor Rhône expert John Livingstone-Learmonth who introduced us to his French associate Yohan Castaing. Over a very jolly dinner we sampled the Clapes' excellent new Saint-Péray 2014 (courtesy of patron Marc Grillon), the 2013 Crozes-Hermitage blanc Domaine Alain Graillot and a delicious red 2011 Saint-Joseph from Jean-Claude Marsanne which showed Northern Rhône Syrah in a very pure light. Sensibly we then called it a night as we all had busy schedules the following day.