The final leg of our Rhône 2015 trip featured the South. The degrees always seem to climb and the sunglasses come out once one passes Valence and a flatter, warmer landscape takes shape. 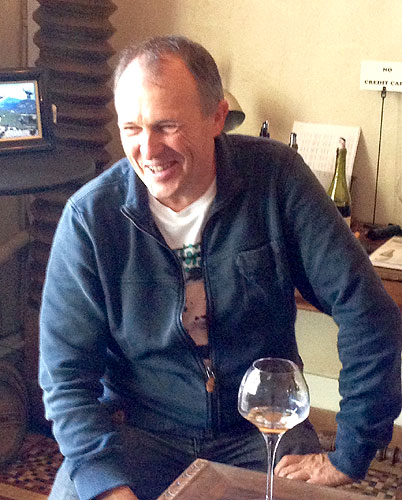 First stop Vacqueyras, where Yves Cheron and right-hand man Jerome Cartier took us through their reliable range of domaine and negoçiant wines which agreeably kicked off with a Vosne Romanée from their sister estate in Burgundy, Domaine Paul Misset – quite a contrast to the previous day's Syrah-fest. 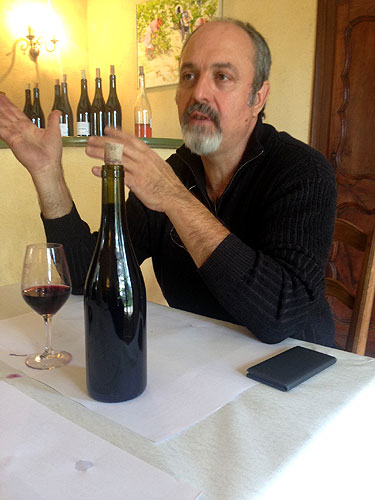 Next up an extensive tasting of Côtes du Rhône, Rasteau, Gigondas and Châteauneuf' across multiple vintages at Domaine Saint Gayan. We had already established with Jean-Pierre and Martine Meffre that out tight schedule allowed us a short lunch in situ. Glancing at my watch as I waited for another delicious morsel of meat to cook in the fondue, I saw it was 3 o'clock and we were already late for our next appointment in Châteauneuf-du-Pape! After a couple of apologetic telephone calls out on the terrace (naturally shifting the entire responsibility on to our hosts), I nipped back in to wolf down the cheese, dessert and coffee with impolite haste. We certainly did not do justice to Christian-Yves' home made tarte tatin or the selection of artisanal cheeses they had brought back from their recent holiday in the Savoie. 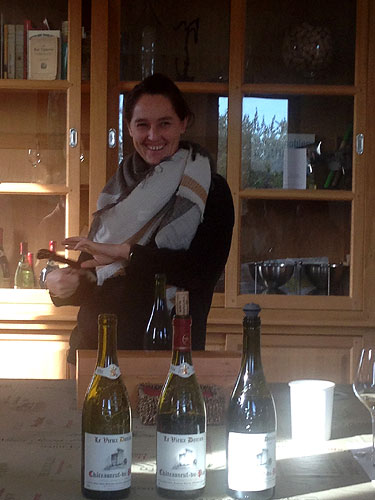 At Le Vieux Donjon, Claire Michel and younger brother François were unfazed by our poor time-keeping. It seemed we were on a Meriodinale clock now. Tastings here are short, but sweet. A sublime white 2015 that has already been bottled by them and shipped by us was a reminder of the gem that is sitting in our cellars. An assemblage of the red 2015 which will be finalised next Spring was equally impressive. Claire indulged us (and added a few more minutes to our tardiness) by opening a bottle of their revered red 2007, which exuded power and finesse, eminently justifying the excitement that prevailed at its inception.

A few hundred yards into town at Domaine Père Caboche, Emilie Boisson led us through a tasting of their IGP, Côtes du Rhône and Châteauneuf' that illustrated how 2015 is very good at every level – a rare thing. Emilie then proceeded to open a 2005 Cuvée Elisabeth Chambellan, a 1992 Père Caboche and, finally, a 1985 Elisabeth Chambellan – thereby unwittingly trumping her neighbour and friend Clare Michel. The 85' was still remarkably vibrant, the 1992 was surprisingly good given the catastrophic flooding of that year (famously in Vaison la Romaine, see https://www.youtube.com/watch?v=a9o3tvuN5pQ) and the 2005 was my standout wine of the day – for drinking now.

The ultimate visit of our trip was at Domaine de Trévallon. Eloi Durrbach poured generous samples of the much-coveted white (2015) which is now supplemented by Grenache, alongside the original Marsanne, Roussanne and Chardonnay. If only there were more of it. Barrel samples of the Cabernet Sauvignon and Syrah 2015s drew broad smiles from the Yapp team. Eloi puts this vintage right up there with the magnificent 1990. Not a bad note on which to head to Marseille airport.

Inside the cellar door at Domaine de Trévallon - just like one of their labels!