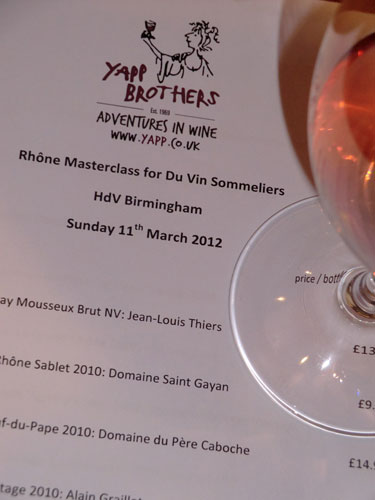 I was delighted when my old friend Ronan Sayburn (www.ronansayburn.com), the wine and spirit director of the Hotel du Vin group, invited me to present a Rhône Master Class to their full team of head sommeliers at the Hôtel du Vin in Birmingham last Sunday. Fortunately talking about Rhône wines is my stock in trade so I wasn’t too daunted by the prospect of presenting a flight of wines to a team of 17 seasoned professionals. My only cause for concern was getting the wine to the venue on time and at the right temperature but I had a good run up the M5 and arrived at the commodious former eye hospital well on schedule. 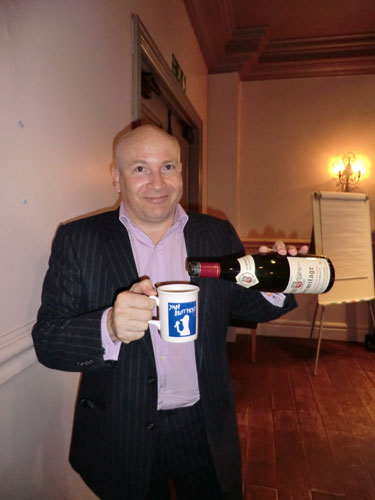 Ronan demonstrates how not to serve Hermitage

Ronan had given me a free rein on which wines to present so I tried to include a diverse cross section from both the Northern and Southern Rhône in an effort to illustrate what rich and exciting regions they are and how much their wines differ. We kicked off with a Saint Péray mousseux from Jean-Louis Thiers from the southernmost and second smallest appellation in the North. This bottle-fermented Marsanne is a great palate primer and is failsafe aperitif for anyone planning a Rhône-themed dinner. We then compared a white Sablet 2010 from Domaine Saint Gayan with a white Châteauneuf’ 2010 from Domaine du Père Caboche, both clean, fruity, appealing and accessible, before heading back to the North to sample a quartet of resonant names. Alain Graillot’s white Crozes Hermitage 2010 (bottled under screwcap) had lots of bright apricot scents and flavours and an elegant dry finish – being relatively inexpensive makes this an obvious choice for restaurants. I just wish Alain made more of it! Christine Vernay’s Condrieu ‘Les Terrasses de ‘l’Empire’ in the recently shipped 2010 vintage was an unashamed crowd pleaser. It is a classic of the appellation with a beguiling honeysuckle bouquet and fleshy, white peach palate and terrific delineation. This was followed by a Château Grillet 2008 which was much more restrained, Burgundian if you like, but charming nonetheless it takes a bit more effort to appreciate its subtle mineral nuances but was well-received by the HdV team. Our final dry white was the Hermitage 2006 from Domaine Jean-Louis Chave. This was greeted with a few minutes silent contemplation – sometimes when people speak least it says most. It’s a terrific rich, complex unctuous wine with a long future ahead of it. I thought it invidious not to include a Tavel, it being France’s only exclusively rosé appellation, between the whites and the reds and Richard Maby’s La Forcadière 2010 was showing very well with a lovely deep, brick pink colour and a wealth of ripe, berry fruit. Rhône guru John Livingstone-Learmonth bought some for his cave personelle last year and endorsements don’t come much higher than that. 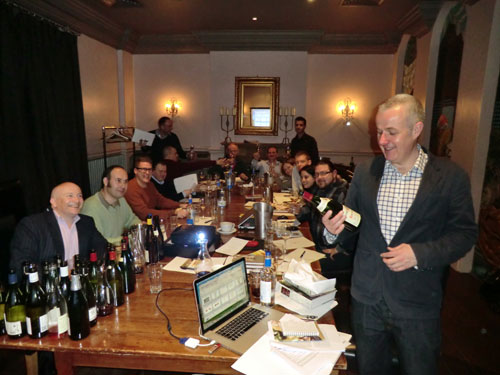 I selected two pretty humble wines for our opening reds. A Grignan-les-Adhémar ‘Le Grand Déves’ 2009 from the Vignerons Ardéchois co-operative and the Côtes du Rhône ‘Cuvée Personelle’ 2007 from Pascal Frères. As Cave Co-op’s and négociants account for a large proportion of Rhône production I think it is important to sample their wines to get a thorough feel for the region. I also think that cheaper ‘everyday’ wines are just as an important qualitative barometer as the star wines with top scores from the likes of Robert Parker. Both showed well with lots of briary fruit and supple tannins – making a strong case for petit vins in grand millésimes – the voluptuous Côtes du Rhône is a likely candidate for ‘house’ wine chez Yapp. The Gigondas Domaine Saint Gayan 2007 again illustrated why ’07 is regarded as a touchstone vintage in the south – it is big and beefy with lots of spicy undertones and strapping tannins – a definite Vin de Garde that should be superb with 5-10 years bottle age.

The next four wines put the spotlight on the 2009 vintage, which is arguably as good in the Northern Rhône as 2007 was in the South. Châteauneuf’ Le Vieux Donjon is a wonderfully balanced light-heavyweight offering with a persistent palate of garrigue fruit supported by ripe tannins that will see it age well for a decade plus. The little-known Brézème ‘Le Grand Chêne’ from Jean-Marie Lombard was punching well above its weight and the general consensus was that it made a good-value introduction to serious Rhône Syrah. Christine Vernay’s ‘Terre d’Encre’ Saint Joseph exhibited why she is regarded as one of the Rhône valley’s pre-eminent wine makers. It is an impressive amalgamation of dense, dark fruit and deft deployment of oak – sleek and glossy it is already very rewarding. Alain Graillot’s ‘La Guiraude’ Crozes Hermitage‘La Guiraude’ Crozes Hermitage drew widespread praise although we all agreed it was really too young to be fully appreciated. In hindsight I should perhaps have shown his regular cuvée or an older vintage.

Our four final reds needed little introduction. Patrick Jasmin’s Côte Rôtie 2006 was slightly adolescent (it should improve) but it had a generous black fruit palate and lovely pitchy tannins. The Clape family’s 2003 Cornas is audacious – atypically rich and fruity but still concentrated and complex – we opened and drank a second bottle over supper! The Chave Hermitage 2007 is really too young to be broached at present but it has all the hallmarks of a great wine – bags of fruit, a fine tannic structure and a fresh acidity that will give it decades of aging potential. We followed it with the legendary Chave Hermitage 1990 now in its prime and, unsurprisingly, the highlight of the evening. The last wine of the tasting was the Muscat de Beaumes de Venise: Domaine de Durban 2009 an exuberantly fruity sweet, peach-scented wine to revive tired palates.

Generously the HdV crew and their charming guest Gavin Quinney from Château Bauduc (www.bauduc.com) in Bordeaux gave a round of applause at the end of the tasting but in truth it was the wines that they were celebrating rather than my skills as an orator. Still, I think Ronan was pleased with tasting if his subsequent tweet is anything to go by: @YappAboutWine - legendary wine company, with legendary wine and legendary staff...not much more to say except.... you’re a legend.