Bright eyed and bushy tailed after a good night’s kip we were now ready for the Northern part of our Rhône foray. First stop was a visit to long-standing Yapp supplier and Rhône ‘royalty’ Jean-Louis & Erin Chave. On the way we dropped into the 4 hectare Clos Florentin vineyard which is where the Chave’s have Roussanne vines from they produce the divine Saint Joseph ‘Céleste’ Blanc. 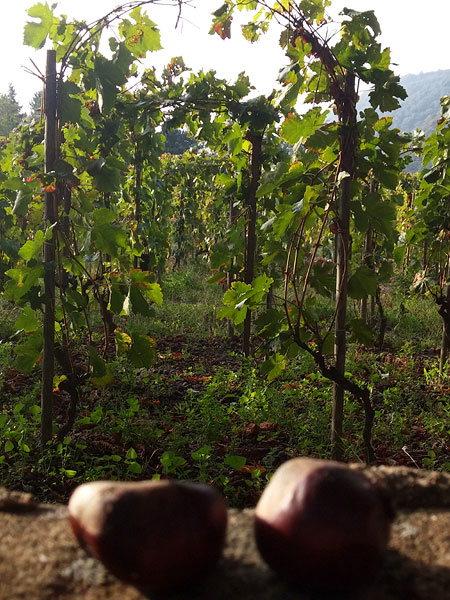 Vines at Clos Florentin. The Chave’s traditionally begin their harvest ‘When the first conker falls’

Moving onto their newly-expanded cellars in Mauve, we were given an informative talk and tasting by Jean-Louis of the 2013 Hermitage white and red that is currently in barrel. It was fascinating to taste the nuances of the individual ‘lieux dits’ that are vinified separately ahead of the final blending that produces their iconic Hermitage. Jean-Louis is a consummate wine maker and has a progressive outlook when it comes to modernising the Domaine. The recently-developed cellars were impressive but it was also fascinating to hear him talk of the tradition that has been carried down through the many Chave generations and he is very passionate about being in tune with nature and the soil when he is making his wines. Indeed, he stated that his Grandfather’s mantra that “the harvest should begin when the first conker falls” still works today. 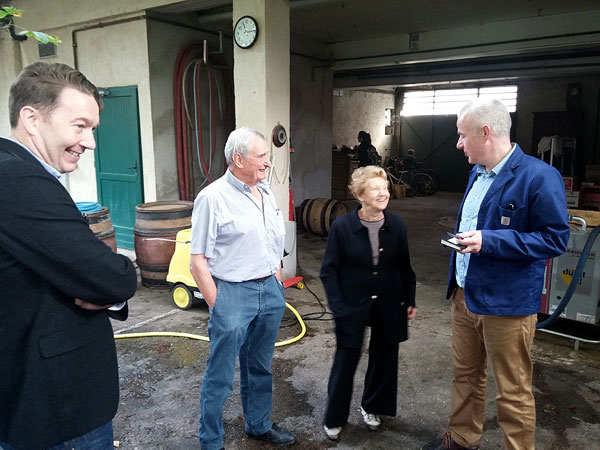 Jason & Tom catch up with old friends (Jean-Louis’ parents) Gérard & Monique Chave. In the background you can see the next generation in waiting.

From Mauves, we drove on to another Yapp stalwart, and the dark, brooding wines of Pierre & Oliver Clape in Cornas. This father and son team consistently produce stunning wines vintage on vintage and it is no surprise that we sell through our allocation rapidly! Another tasting from barrels of their 2013 affirmed that this is shaping up to be a classic vintage. Similar to the excellent 2005 and a certain ‘vin de garde’. 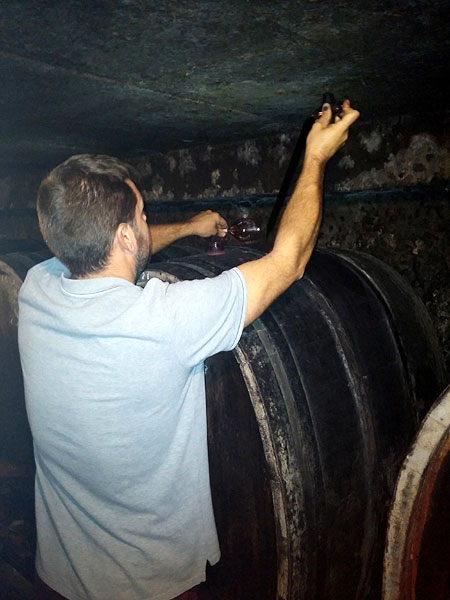 Olivier Clape taking a barrel sample of the 2013 Cornas

To finish what had been an excellent day of tasting we whizzed down to Brézème and Domaine Lombard. We have been importing these wines for some time from wine maker Jean-Marie Lombard, but recently he sold up and retired and we were keen to meet the new owners. Julien and Emmanuelle Montagnon were most welcoming and we were all impressed with their enthusiasm and energy in what they were doing. The Domaine has had some major investment in terms of equipment and buildings and Julien is very keen to expand both the quality and the recognition of wines from this region. To this end they are soon to be certified organic. Certainly in terms of what we tasted they are on the right track and you will need to keep an eye out on our website and 2015 list for evidence of this progression and some exciting new wines.

Day three was upon us and any sadness about leaving what has been a stunning whistle-stop tour of the Rhône valley was tempered with the knowledge that we still had three premier domaines to visit before our flight from Lyon. First up was a visit to Domaine Alain Graillot to meet with Antoine & Maxime Graillot alongside their good friend and business partner Thomas Schmittel. The Frères Graillot have been continuing their father’s great work and the Domaine goes from strength to strength. Thomas described the difficult 2014 vintage as one where they ‘learnt a lot’. Time will tell how this will develop but for now the 2013 were showing very well indeed.

Leaving the flat Chassis plateau and Crozes Hermitage, we continued ever northward to the steep slopes of Côte Rôtie and Domaine Patrick Jasmin. With his cellars in the heart of Ampuis Patrick produces elegant wines with plenty of structure and depth. He produces just one cuvée of Côte Rôtie from different parcels of vines located in both the Côte Brune and the Côte Blonde. It was most interesting to see Patrick take samples from several barrels to give us an impromptu blending of his 2013 vintage! We also got to taste a flight of vintages back to 2009 which was a top year and it was indeed a top wine.

We had a most enjoyable lunch with Patrick and his wife Arlette just down the road from their cellars at Bistro de Sérine, where Patrick caused some amusement by complaining that he often could find no food in the house and was glad to be able to take us to the Bistro. Arlette remarked that perhaps his stout figure did not necessarily reflect the validity of his complaint. We’ll leave you to decide!

Our final stop was at Domaine Georges Vernay for a quick taste of the latest vintages before we headed into the hills for a look at the stunning terraced vineyards of Château Grillet.

The Château Grillet ‘amphitheatre’ of vines

As our plane departed Lyon to eventually join the Heathrow stacking system later that evening, we had time to reflect on our visits and discuss our tasting notes. Do watch out for the definitive Rhône Report that Jason Yapp is putting the finishing touches to ahead of our launch of our ‘en primeur’ Rhône offerings!