To 43 Upper Brook Street, Mayfair in my least constrictive suitings to meet Silvano Giraldin, Michel Roux and super sommelier David Galetti to select the menu and wines for our keenly-anticipated Spring Lunch next Thursday. If I had £1 for every time I've been told that I have an enviably cushy job and that this doesn't constitute proper work I'd be able to dine there more frequently and besides, people have no idea how much effort goes into making things appear effortless. Alongside some delicious canapés we road-tested a couple of sparkling wines and had a very clear winner in the form a Crémant de Loire rosé, whose gentle summer berry scents and flavours met with universal approval - so we will definitely kick-off with that next week. 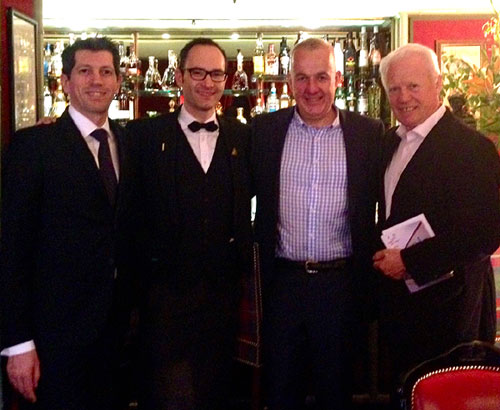 You need an iron will to strike a well-executed Soufflé Suissesse from the race card, especially one that has found a perfect partner in the form of a young Jacquère from the Savoie, but with ruthless saing froid we rejected it in favour of new season's asparagus with parmesan shavings and a truffle dressing that had a marvellous affinity with an interesting, organic Faugères Blanc from Château des Estanilles. 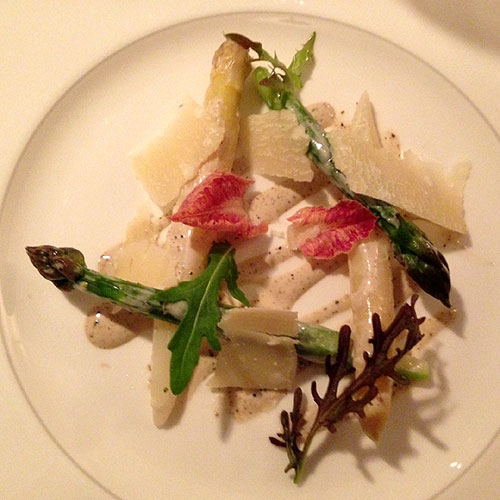 Asparagus with parmesan shavings and a truffle dressing

If that decision was a tough one the next was harder still. After sampling various different piscine plates we ended up with a near dead heat between a garlic risotto with squid and galinette et ratatouille. The latter won the day on points as it absolutely shone alongside an on form Cassis: Clos Sainte Magdeleine 2013. Provençal Perfection - I would not have been surprised to open my eyes and find myself sitting in a cove beneath Les Calanques!

After leaning towards lamb with spring vegetables for our main course our heads were turned by an audacious dish of pork loin and belly served with macaroni, wild mushrooms and a green mustard sauce that romped home hotly pursued by Fredrik Fillitreau's sublime old vine Saumur-Champigny and a tub-thumping Bandol ‘Mas de la Rouvière'.

The assiette des desserts at Le Gavroche is a thing of wonder and I for one struggle to forgo the peerless and unashamedly boozy rhum baba but Silvano is a stickler for seasonality and pointed out that more sophisticated palates than mine might appreciate a delicate rhubarb and ginger panna cotta. To partner this heavenly creation we plumped for a Jurançon Moelleux from Domaine Bellegarde, packed with honeyed, orchard fruit and offset by a fine acidity this should bring proceedings to a suitably uplifting conclusion.

Writing this back in the more profane atmosphere of our office I'm already looking forward to my return visit next week!