Ten Quick Questions for a Wine Aficionado: #17. Will Lyons

1. As a journalist, you critique many types of wine but what are your personal preferences?
One of the privileges of writing The Sunday Times wine column is that I am given free rein to review wines from everywhere – Moldova to Uruguay. But If I had to pick one country to drink wine from for the rest of my life it would be France. I simply love the classic wines of that country. But my first and true love is Bordeaux. It's the wine I collect the most, drink the most and enjoy the most. I do understand it's quite an unfashionable view these days!

2. Can you tell us an interesting food and wine pairing from your travels?
In Beirut, I once had brain followed by, I think it may have been a sheep's testicle and then a soup which was essentially a boiled lamb's foot. We paired it with some rather strong Arak spirit. It didn't make it any better. What I love about France, particularly in the Loire Valley, is that you'll still be served a vegetable course, something like local champignons (mushrooms) and warm toast. These are wonderful with a glass of Chinon. But the pairing I most look forward to is half a dozen oysters and a jug of drinkable, honest local rosé served at one of those wooden shacks on the edge of the bay of Arcachon after a busy tasting week in Bordeaux. It is heavenly.

3. Are there any exciting new enclaves of wine production we should be looking out for?
Recently I have tasted some spectacular sparkling wine from Moldova and the Valle de Guadalupe in Baja Mexico is well worth a little consideration. But I'm really excited about the Agly Valley, west of Perpignan in France. Some of the reds and whites emerging from that region possess the complexity and finesse of some of France's great appellations. No exaggeration. Le Soula and Domaine Gauby are worth a try.

4. Is there a type or style of wine that you don't 'get' or get on with?
Honestly? I tend to find pleasure in all styles. I guess if I had a preference I would err on the side of finesse, elegance and modest alcohol. 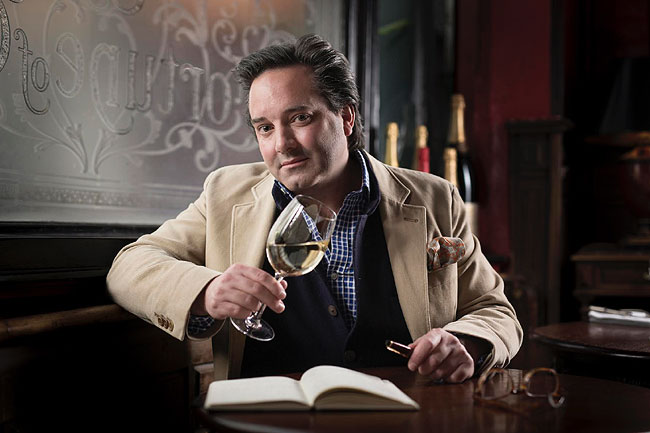 5. Do you think climate change is going to irreversibly damage the world's current classic wine regions?
It all depends how quickly viticulture can adapt to the changing climate. The climate is changing and all the evidence suggests it will go on changing but there are certain things that can be done. Look at California where they now harvest at night to preserve the fruit and freshness of the grapes. Or they plant their vines from north to south so the sun moves around the vine throughout the day and gets shade in the afternoon to avoid the strength of the heat at its most intense. Whether these tweaks will be enough depends on how much the climate deviates in the next few decades. I'm afraid I don't have the answer on that one.

6. You got into wine appreciation at quite a young age. Did you have a revelatory tasting experience?
I did. Believe it or not I was lucky enough to start a pretty serious wine tasting course in my last year at school in a society known as La Confriere. Run by a particularly lively Scotsman who sadly is no longer with us. I then went up to Edinburgh University and was President of their Wine Society for a few years which to my surprise was equally as serious! But my revelatory tasting experience was a very old bottle of Pomerol tasted when I was 21. A few years ago I wrote about it in The Wall Street Journal: "I was working in a wine shop in Edinburgh at the time, and one morning a customer came in carrying a bottle, with its cork snapped. We had a policy of replacing bottles from dissatisfied customers, and so that afternoon we prized out what remained of the cork and tasted the wine. It was heavenly. Even though the flavour—slightly smoky, with hints of plums, liquorice and rich blackberry—was powerful, the texture was so light. I think it was at that moment that my eyes were fully opened to the incredible flavours of fine wine."

7. The drinks are on us. (Hypothetically). What will you have?
A case of your 2016 Drôme La Re-Nommée by Domaine Lombard in the Rhône please! It has a gorgeous old school nose with notes of spices, herbs and the scent of the garrigue. Yum seriously yum.

8. You've not got the easiest birth year for a wine lover. 1976 was a pretty hot, dry summer in Northern Europe. Have you any anniversary bottles in the cave personelle?
Funnily enough I don't! It's a terrible year, I have some 1977 vintage port but I was thinking of buying a case of some Vin doux Naturel from 1976. But don't worry – I have plenty of Claret and lovely old Burgundy for the big day.

9. Has your experience in the commercial trade given you any valuable journalistic insight?
I consider myself immensely privileged to have worked both in the wine trade and the newspaper business. I learned to taste professionally with Hew Blair at Justerini & Brooks and learned a lot from Patrick Sandeman and Charles Lea at Lea & Sandeman. Then worked with a whole raft of MWs at Berry Bros. & Rudd. On the other side, I have sat in the same newsroom as Pulitzer prize finalists at The Wall Street Journal. The most important thing I have learned from the wine trade is that at the end of the day this is a relationship business. Whether that is with your clients and growers or with your readers writing for a newspaper.

10. What has been the apogee of your tasting career to date?
I once flew down to Burgundy in a private jet with Sean Connery which was pretty memorable! On a serious note, I have been fortunate enough to taste many very old and sought after wines including Petrus 82 and Cheval Blanc '28 and '47. But a few years ago, I was down in Epernay and was served a mystery glass of wine which I was asked to identify. Country, region, sub–region, property and year. I had a sniff and a sip and correctly identified it as a wine from Margaux (old) and was asked to name the vintage. It was so fresh tasting I said somewhere in the 70s. I was a hundred years out! It was a Château Malescot St. Exupéry 1873. But three out of 5 wasn't bad!

Will Lyons, Wine Columnist The Sunday Times.
Described by The Spectator magazine as having one of the finest palates in Britain Will Lyons is a wine writer, author and broadcaster. For more than a decade he has published a weekly column on drinks, formerly in The Wall Street Journal and now The Sunday Times. His humorous, informed, down-to-earth writing has been recognized in both the Glenfiddich and Roederer wine writing Awards. A past president of the Edinburgh University Wine Society, a Commanderie de Bordeaux, Will has worked in St James's for both Berry Bros. & Rudd and Justerini & Brooks. He is Vice President of The Sunday Wine Club.