1. Did you ever have a wine epiphany when you tasted something that completely changed your critical horizons?
Having had a pretty good innings so far, of which well over half has been in the wine trade, there have been a few. Probably one of the most insightful was a twenty-five year old Weisser Burgunder (Pinot Blanc to those Francophiles amongst you) from Austria, which was accompanied by an extremely runny, but fortunately not equally old Vacherin Mont d'Or. This cemented three things in my head. Firstly that old doesn't have to be classic and red. Secondly that Weisser Burgunder can go way beyond primary and pretty. And thirdly that cheese is the second best thing in the universe after wine.

2. Has living and working in Germany imbued you with a preference for, or enhanced appreciation of, German wines?
Most definitely. Whilst my friends seemed to think, at the time of my exodus from island life to the continental mainland, that I was entering some kind of L-word* purgatory, actually it was the start of a mind-boggling and eye-opening adventure. Apart from cars, the Germans seem to like to keep some of the better things they make to themselves.
*Note: the L-word refers to, dare I say it, Liebfraumilch.

3. You are married to a chef so must have more insight than most into food and wine pairing. Can you tell us an interesting combination that we might not have encountered previously?
A mid-week combination we have enjoyed recently is an old vine Auxerrois from Alsace with spätzle with spitzkohl and bacon. I'll translate. Spätzle is a kind of pasta originating from Swabia, a region of Germany where the populace is said to be the most hard-working of all the industrious Germans. This may be borne out by the making of said pasta, which involves more pans of boiling water than I imagine are required for child-birth and a lot of arm action scraping pieces of sticky dough into the water. The spitzkohl is a kind of pointy cabbage and is another regional specialty of significance. The bacon gives the dish bite as well as protein and as it is my husband who cooks this (I prefer to concentrate on opening the bottle of wine), ample amounts of butter and cream are used in the cooking so that one is not devoid of calories by the end of the evening.

4. Does being a Master of Wine make it difficult to switch off and enjoy wine as a casual drink with friends without over analysing what is in your glass?
The tendency for dissection remains even if it has become rather more subliminal than in the pre-MW days. However, once the first few sips have gone down, it probably feels the same as English literature students getting carried away by a good novel – the moment takes over and immersion in another world begins. 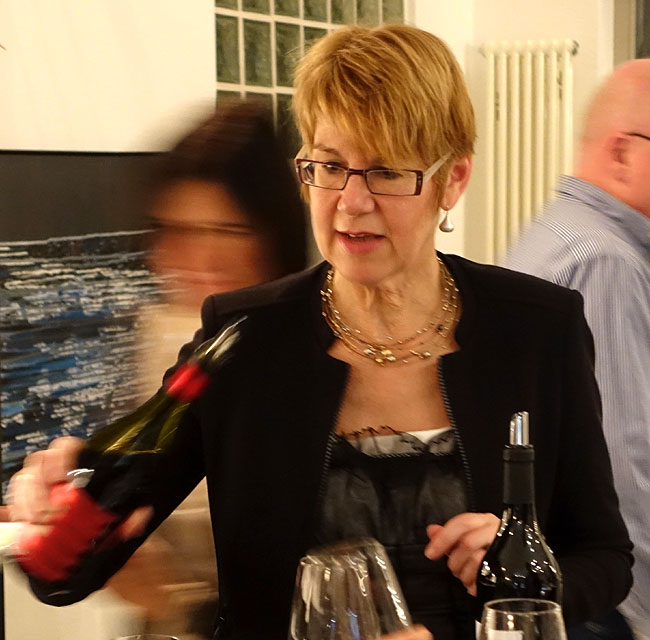 5. If, in a state of emergency, you could grab just one bottle from your cellar what would it be?
Probably a Pinot Noir. Not one of those juicy, ripe and bouncy numbers from the new world. And probably not a 'you're lucky if you hit the jackpot of right vintage, right appellation and right grower all at the same time' Burgundy. Probably more an ethereal, textural, fine-grained, modestly restrained Spätburgunder from the Ahr Valley or Baden. With a bit of age, of course.

6. Can you tell us a type or style of wine that you think is underrated?
It has to be Riesling. Not only underrated but also under-understood. Why do people only think it's sweet? Why do they pronounce it incorrectly? It's so simple - it rhymes with g-string.

7. Is there a wine or region you really don't get along with?
Anything orange. Give me a good sensible dose of sulphur and a dollop of unoxidised fruit any day.

8. What grape variety would you be most confident of identifying in a blind tasting and why?
Riesling. Am I starting to sound like I am more German than the Germans? It is simply inimitable and usually given away by high levels of taut and tingling tartaric acidity and extraordinary purity of expression.

9. Is having a good professional palate a question of nature or nurture?
I strongly believe in nurture with a small dose of nature. If you practice enough and engage the synapses between palate and brain to build up a catalogue of connections and logical conclusions, you have a good chance of developing a sound ability at communicating to others what your palate detects, which is far more important than just persuading yourself you know what you are tasting.

10. What advice would you give to a school leaver hoping to embark on a career in the wine trade?
Only do it if you can pronounce Riesling properly. But seriously, I could not imagine any other career. It may not be the best paid in the world, but it is one of the most diverse and the most rewarding. A good grounding in WSET qualifications is a must so that you actually know what you are talking about, and sound business acumen would also not go amiss.