It’s always great to get away but even greater to get away and find something new that you can’t fathom why on earth you’d not discovered it sooner.

This year the Catanach family decamped to a small fishing village called Burgau on the Algarve – just a quick flight on a budget airline (the blue one not the orange one as my 6 year old son duly pointed out) from Bristol and practically there we were Euros in hand and ready to roll.

In reality I was expecting just a few weeks in the sun and all that came with that (happy children, happy wife, body boarding in the sea, a few meals out and all things ‘pool side’) – that we of course got all the above but landed a few new discoveries along the way that I certainly wasn’t expecting. 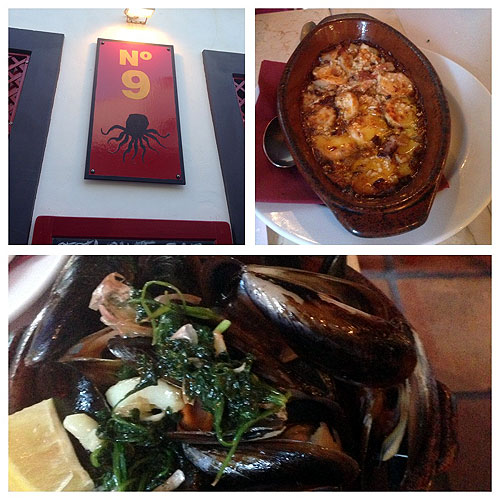 My children are aged 8 and 6, so as a result they really see mealtimes when away as a bit of an inconvenience as they’d much rather be playing (pool, poolside, in the sea etc) – so it’s often a ‘bolt and run’ approach to keeping their energy levels and calories up where they should be.

The boon here was a new slant on ‘Kids Club’ (or ‘Kids Klub’ as it said on the blackboard by the bar) – I’m normally wary of these ‘clubs’ as I’d much prefer a ‘family holiday’ to be just that – and despatching in my case ½ the family each day somewhere else doesn’t feel right.

However, this ‘Klub’ only ran twice a week – and only between 6.30pm and 9.15pm, so a prefect ‘guilt free’ excuse to have a meal out for two – knowing that we’d be up for time to enjoy 3 courses, some wine – without our children, for want of a better expression – ‘loosing focus’. 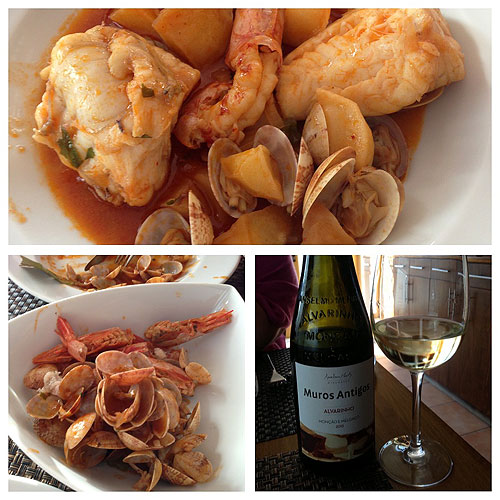 A Cataplana is a Portuguese dish designed purely for seafood dishes – this was new to me but the dish of fresh clams, monkfish and prawns with Piri-Piri was a revelation – falling into my slim category of things I’d happily eat once a week, every week. I know that in reality you need to be in a Portuguese fishing village, have the sun on your back all day, get the fish literally out of the sea and know what you’re doing – but that aside it met all the criteria! We washed this particular one down with a lovely chilled bottle of 2012 Alvarinho as recommended by the patron – and was spot on! 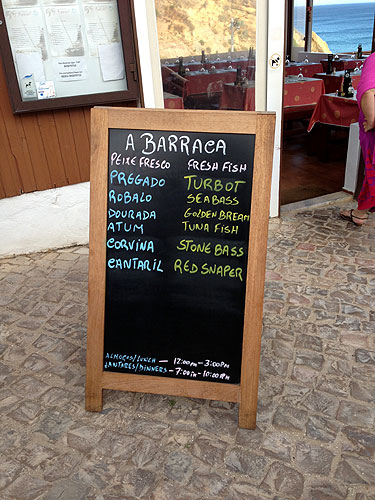 On other ‘Klub’ nights we ventured to ‘No 9’ (the best place to eat Octopus) and A Barraca (AKA ‘The Hut’) where they bring you a tray of the best fish caught that day – and you just choose which one you want to eat!

The two weeks literally flew by – the adults getting their ‘sneaky’ adult meals out a few times and a great time was had by all. Sadly, on the return, we were near our Ryanair (the blue one – not the orange one) baggage limit – so I decided not to stow a souvenir Cataplana dish – it’s just an excuse however to go back next year!