Last Saturday saw the great, and the very good indeed, on display at the Saatchi Gallery in London when the Robert Parker Matter of Taste road-show came to town. This event featured over 200 wines from around the world, the ‘only’ requirement for entry being that they needed to have scored 90 or more points in Robert Parker’s ‘Wine Advocate’.

We were delighted to be present at this unique showcase alongside Ron & Elva Laughton from their iconic Heathcote winery – Jasper Hill. They had popped over to show the latest vintage releases that will be hitting our shores later this year. Fortuitously, the Parker scores for these wines were announced just the day before the show and, as with previous vintages, Ron and his winemaker daughter Emily, had yet again produced a cracking range of wines. 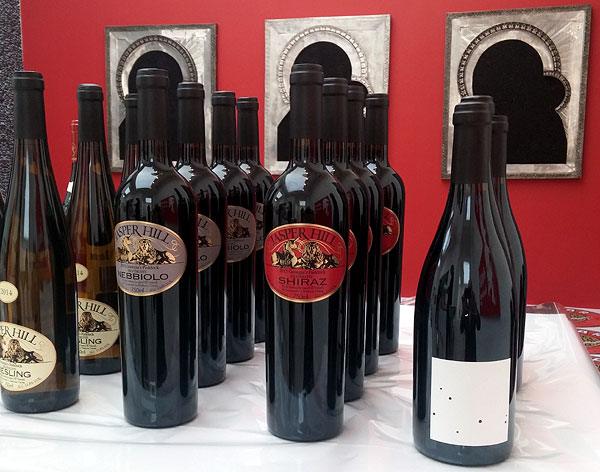 The Wines and their Parker Scores:

Being located in the Saatchi Gallery, there was no shortage of artwork on display alongside these knockout wines. The Jasper Hill wines were shown alongside Michel Chapoutier’s top Cuvées and both winemakers were located next to Alexander Kosolapov artwork. It may have been pure luck or perhaps shrewd organising but Kosolapov’s ‘Lenin and Coca-Cola’ work with "The Real Thing" logo cried out for a bit of cheeky photo bombing by Ron. His and Michel’s wines are a polar opposite to the artificial alchemy of the world’s favourite sugar rush. The Jasper Hill secret is simplicity. Why does Jasper Hill taste so good and can truly be called “The Real Thing”?

Ron Laughton’s passion for being as natural as possible with his wine making attracted the attention of Rhône producer Michel Chapoutier and they subsequently started a joint venture producing a Heathcote Shiraz called La Pleiade. This old world/new world collaboration is stunning. Yapp Brothers still have a few bottles left of the 2010 vintage as described by Mr Parker "They are of very high quality and deserve readers’ attention. Hopefully my prose has convinced more than a handful of readers to try these remarkable wines from one of the most fascinating and compelling personalities in the entire wine world, and one dedicated to the highest quality." 96/100. Then we have to wait for the 2012 (95+ points) to arrive in the next couple of months or so. With another high score and great reception on Saturday it may well be worth considering putting in a pre-order to guarantee an allocation!

The day ended with an avidly attended Masterclass from Ron and Michel, hosted by The Wine Advocate’s Jebb Dunnock. It was fascinating to hear the two winemakers joint philosophy (as well as an occasional difference) whilst tasting 8 top scored wines from their archives as they both spoke about their friendship and their shared passion for the real thing.