One of the highlights of our 6 day ‘Pop-Up’ residency at number 38 Exmouth Market last week was a vertical tasting of 10 different vintages of Provence’s celebrated Domaine de Trévallon. The vineyard, which lies on the northern edge of the Alpilles massif, 25 kilometres south of Avignon, was first planted in 1973 by visionary vigneron Eloi Dürrbach who dropped out of architecture studies at Les Baux Arts in Paris to pursue his dream. 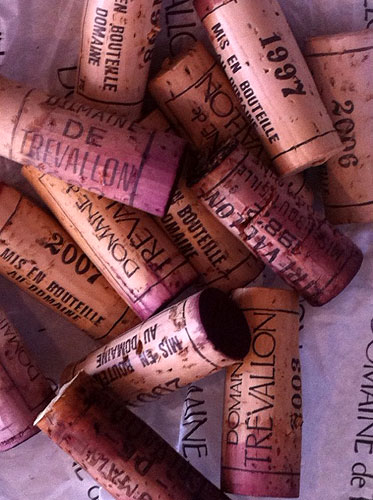 From the outset young M. Dürrbach caused displeasure amongst the chemises blanches (to use the derogatory vernacular for bureaucrats) at the Insitut National des Appellations d’Origine by eschewing the officially sanctioned Grenache and Carignan grape varieties in favour of Cabernet Sauvignon and Syrah in approximately equal volumes. As a result the estate has endured almost 40 years of topsy-tury classification starting out as a ‘VDQS Coteaux des Baux en Provence’ in the inaugural 1976 vintage, then becoming an ‘AOC Coteaux d’Aix en Provence – Les Baux’ in 1985 only to be demoted to being a ‘Vin de Pays des Bouche de Rhône’ in 1995 and finally becoming an ‘IGP Les Alpilles’ in 2009. No matter, the official nomenclature may be disastrous but the wine-making has been excellent. Eloi has farmed the estate organically from the outset and has a non-interventionist philosophy, only deploying natural yeasts and allowing the red wine to have a long (up to 2 year) élevage prior to bottling to allow for micro-oxygenation. 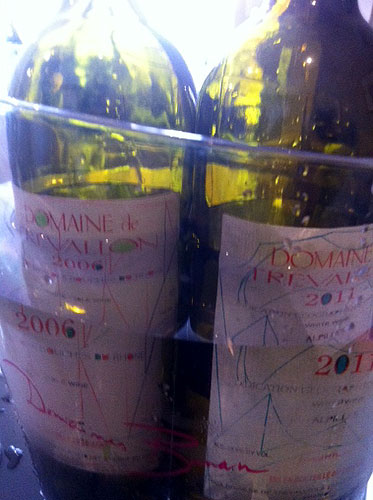 Eloi avers that too much manipulation in the cellar results in bland, homogenised wines that lack character. Consequently the wines of Domaine de Trévallon exhibit more vintage variation than many others which may explain the high level of professional interest in sampling a flight of 10 wines. Today the estate boasts 19 hectares under vine (two of which are planted with white grapes - Marsanne, Roussanne and a spot of Chardonnay) but back in the 1970s there were only 3 hectares in total producing around 600 cases of wine per year. For this reason older vintages of Trévallon are exceedingly rare but fortunately my father Robin took a gamble on a gut feeling about an ‘impenetrably inky and inert’ speculative sample of the 1977 vintage and we have shipped a relatively generous allocation ever since. 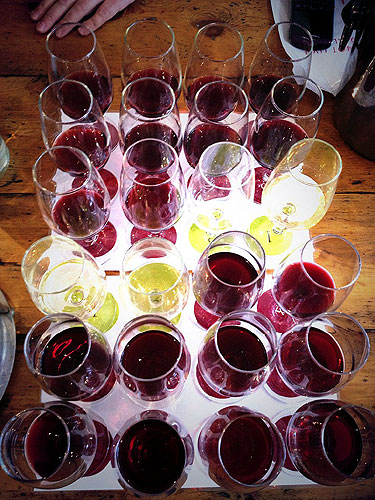 In the spirit of the ‘Pop-Up’ I wanted to make the tasting relatively manageable and upbeat but narrowing the race-card to just 10 vintages of red and 2 of white was not easy. In the end the whites were pretty much self-selecting being the only 2 years we had several bottles of - 2011 and 2005. For the reds I chose personal favourites and wines from failsafe vintages with accredited historical testimonial – 2009, 2007, 2005, 2003, 2001, 1998, 1995, 1990, 1985 and 1982. I had tasted the 1990 last month at Andrew Edmunds restaurant in Soho and it was a shoe-in. I’ve never had a dud bottle and it’s always been delightful. The legendary 1982, once described by Robert Parker as being ‘stunning’ with an ‘explosive richness’ was another obvious choice not least because the Dürrbachs themselves no longer have any library stock. I also bought along a bottle of the 1997, a lighter vintage I’ve never much cared for as an optional extra for those who wished to try it.

A combination of rare wines and a small venue meant we had no problem gathering a posse of professional tasters to sample the line-up including journalists (Jancis Robinson, Victoria Moore, Matthew Jukes and Stephen Spurrier) restaurateurs (Andrew Edmunds and our host at number 38 Simon Lee) sommeliers (François Bertrand, Andrea Fasan and Laure Patry) and our old friend Stephen Browett the boss of fine wine traders Farr Vinters – a longstanding Trévallon fan.

Happily every single wine we opened was in good condition – perhaps a reflection of the fact that they had all stayed in our cellars since shipping. The highest scoring wine on the day was the fully mature red ’82 followed by the 1990 which still has amazing vigour. The 2007 was the best youthful vintage – already eminently drinkable with lovely a concentration of ripe, dark fruit and the 2001 vintage indicated that it can drink very well in middle age. So much so that we revisited a second bottle over an unimpeachable lunch next door in Medcalf. Of the two white wines all but two of us preferred the 2011 but both were showing well and very pleasant to drink – somewhat academic given its scarcity.

The post-tasting round table discussion concluded that Domaine de Trévallon is a wine of great vintage variation but also of longevity and character. I still can’t improve on Clive Coates’ description from a 2000 edition of ‘The Vine’: “How do you describe the wine? Splendidly coloured. Impressively concentrated. Structured without being brutally solid. Balanced and complex. Those are the bare bones. And the flavours? Blackberry and blackcurrant, cedary and almost sweet in its richness, with an aspect of roasted wild Provençal herbs. It is a wine of the garrigues; it is a wine of uncompromising personality; and, like its origins, it is a wine of no half measures. There is danger here. There is excitement. There is passion.”