Upstairs at The Ten Bells

‘Stay-up’ seems to be this year’s ‘Pop-up’ as restaurants that began as guests, have turned into squatters. I had heard good things about ‘Upstairs at The Ten Bells’ which opened last November intended as a three month stay, but whose success meant that they have taken up residence.

A group of guys, aka ‘The Young Turks’, who made their names in pop-ups and dining clubs, as well as stints at The Ledbury and St John, have created a jolly atmosphere, backed by good-value, well-sourced food (£39 for 4 courses) and a short, interesting wine list – 40 wines, sourced from half a dozen suppliers. The chestnut and truffle soup was my stand-out dish, partnered with a glass of rich, white Anjou. 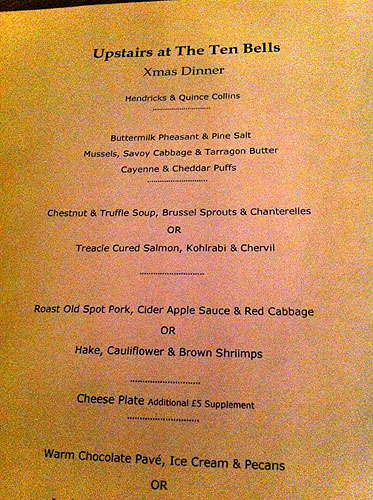 This part of town, Commercial Road, still has an edge, even if skinny jeans and facial hair are slowly giving way to suits and side-partings. I was dining with an old mate who is training to be a counsellor, so he gets to test his latest theories, I get free therapy and we split the bill. Everyone’s a winner.

If you go, as I would urge you to do, you can get a cheap thrill by asking the downstairs barman (which is a separate establishment), how to find the restaurant. If Heston did a guest turn here it could be ‘Dinner upstairs at the Ten Bells’ which would save a lot of texting re times, how to find it, etc.

It’s obviously going well as this team is about to open a second restaurant in Shoreditch Town Hall called The Clove Club and Jamie Oliver was dining at the next table. Bish, bash, bosh. 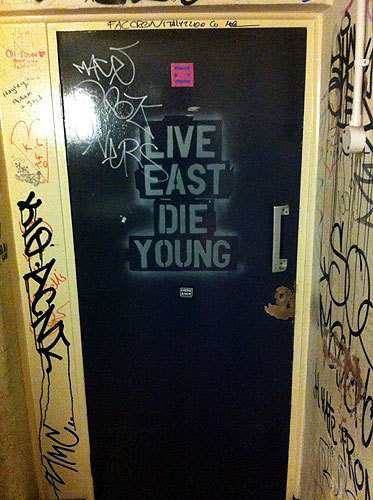