My Best Man Gareth (who’s now living on the west coast of the USA) used to be the proud owner of a vintage lime green MG BGT – and I was always slightly intrigued not only by the fact the car still actually worked but all the various gizmos that had been included that looked now practically antique - a cigarette lighter and an ‘overdrive’ being the hardest to explain nowadays to my young children. The Yapp H-Van still has the same appeal (I’m told it’s a 1979 model; apparently ’79 was the last year H-vans were made commercially) but again the unusual still intrigues – there’s a crank handle included in the van – just in case.

This weekend, running a long-overdue errand of moving a fridge that gave up the ghost months ago to the CFC safe recycling centre, I’d called in a favour and was delighted to discover my friend Richard had recently landed himself a 1980 Land Rover - an incident involving wine, a late Saturday night, a laptop and a ‘cheeky’ bid on ebay by all accounts. We took my 6 year old son with us for the ‘adventure’ and he seemed far from convinced initially that taking a defunct fridge to the tip in a ‘van’ that was now 33 years old was in fact an adventure – but when we mentioned it was like the jeep driven by Captain America he was soon on-side. 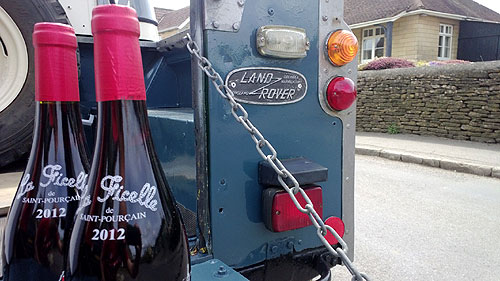 The village operates routinely on old-school bartering. Here we were running on payment by wine, a few bottles of Saint Pourçain: La Ficelle 2012 seemed to be the order of the day!

Vintage vehicles and vintage wine - what’s not to like?