I spent last Saturday evening holed up in room 34 of the Cardiff M4 Travelodge with several other grown men dressed in lycra. Now, I acknowledge that for some readers this might be a fairly run-of the-mill night out, but it was a first for me. We had headed West for an early start on the infamous Dragon Ride, 130 miles through the Black mountains and Brecon Beacons. Spectacular countryside, unpronounceable place names and brutal climbs. They may call it ‘The Valleys’ but we didn’t seem to spend much time in them. I believe the course had been designed by The Grand Old Duke of York. Team Yapp limped home in around 10 hours. Breakfast and Tea with our friends, Claude the Butler.

Pleasingly, it was the second outing for our new Yapp custom kit that had made its debut on the Tour of Wessex a week earlier. In contrast to ‘the Dragon’, the Tour of Wessex had been an enjoyable frolic through the rolling hills of Somerset, Dorset and (briefly, but importantly) Wiltshire. In fact the route took us straight past Yapp HQ and necessitated a pit stop for a glass of Champagne. On the subsequent (and final) 20 mile section of the 106 mile day, we averaged 20mph which says everything you need to know about the performance-enhancing qualities of Dumangin & Fils! 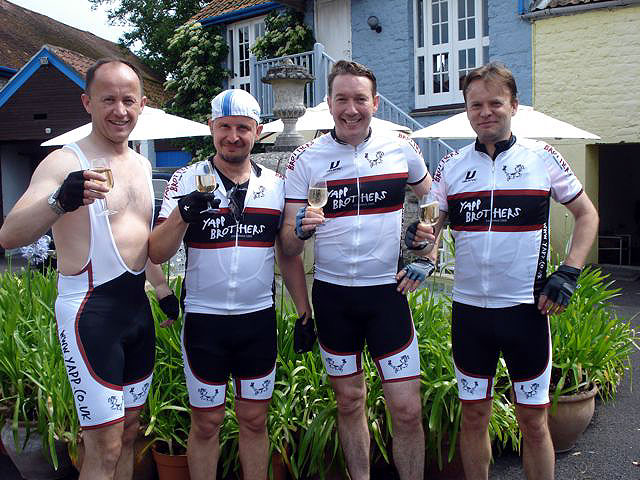