A great new addition to our growing range of rare spirits is this single-variety French Brandy from the Charente. Double-distilled from 100% Folle Blanche and matured in American oak barrels (the reason why it's not called 'Cognac') for two years prior to release, only 750 bottles of the spirit were produced.

Excellent as a digestif, yet entirely suitable for cocktails - a Tour Eiffel or Sidecar would be fitting! 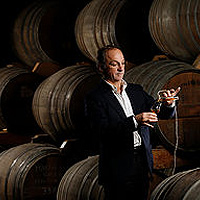 The origins of Maison Monteru dates back to the late 1700's when the descendant of the Count of Montery moved to the Cognac region and married his daughter to the son of a cognac merchant. Since then, Maison Monteru has remained closely tied to the tradition of brown spirits distillation, and it has progressively become a reference for super premium brandy and a leading innovator in the category. Maison Monteru is the first French producer of single grape brandies.

Single grape wines are double distilled in copper pot stills, using the traditional Charentais Alembic. The spirits are then aged in their own stone cellar, on the Atlantic coast, where temperature and humidity remain stable, in different oak casks: first in French oak casks, imparting delicate nut flavors, and we finish the aging process in American oak to gain subtle spice and brioche aromas. Maison Monteru spirits are then bottled in individually numbered bottles to keep the uniqueness of each batch.