This organic Monbazillac from Domaine de l'Ancienne Cure is a wonderfully rich sweet wine made from low yields of late-harvested, botrytised, Semillon (90%) and Muscadelle (10%). With a chilled glass in hand, one is transported to a balmy evening in the Dordogne!

A sublime Monbazillac wine which has a wonderful golden robe, barley sugar bouquet and complex dried fruit palate offset by a fine acidity. It has a lovely tawny colour and is richly honeyed with complex notes of dried fruits, nuts and caramel with a heady orange blossom bouquet.

Traditionally, Monbazillac wine is served chilled before a main meal, often as an accompaniment to foie gras, but it makes an equally harmonious partner for fruit-based desserts or cheese, particularly blue cheese. Certified organic. 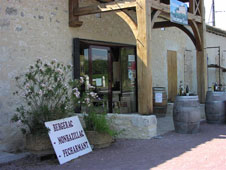 Both the town and appellation of Bergerac lie in the centre of the Dordogne department with its beautiful landscape of rolling hills and burgeoning population of expatriate Brits. It is also home to some of France's oldest vineyards producing inexpensive dry, white wines predominantly for local consumption, and to the south of the town of Bergerac itself lies the smaller and more specialized sweet wine producing appellation of Monbazillac. It is in the Monbazillac area of production that Christian Roche's Domaine de L'Ancienne Cure is to be found.

Christian is first and foremost a Monbazillac producer but he has proved to be equally capable of making classy, dry white wines from the same mix of grapes – Sauvignon Blanc, Sémillon and Muscadelle. His vine holdings total 40 hectares, which is large for an independent producer, and 15 hectares of this land lie within the hallowed perimeter of Monbazillac.