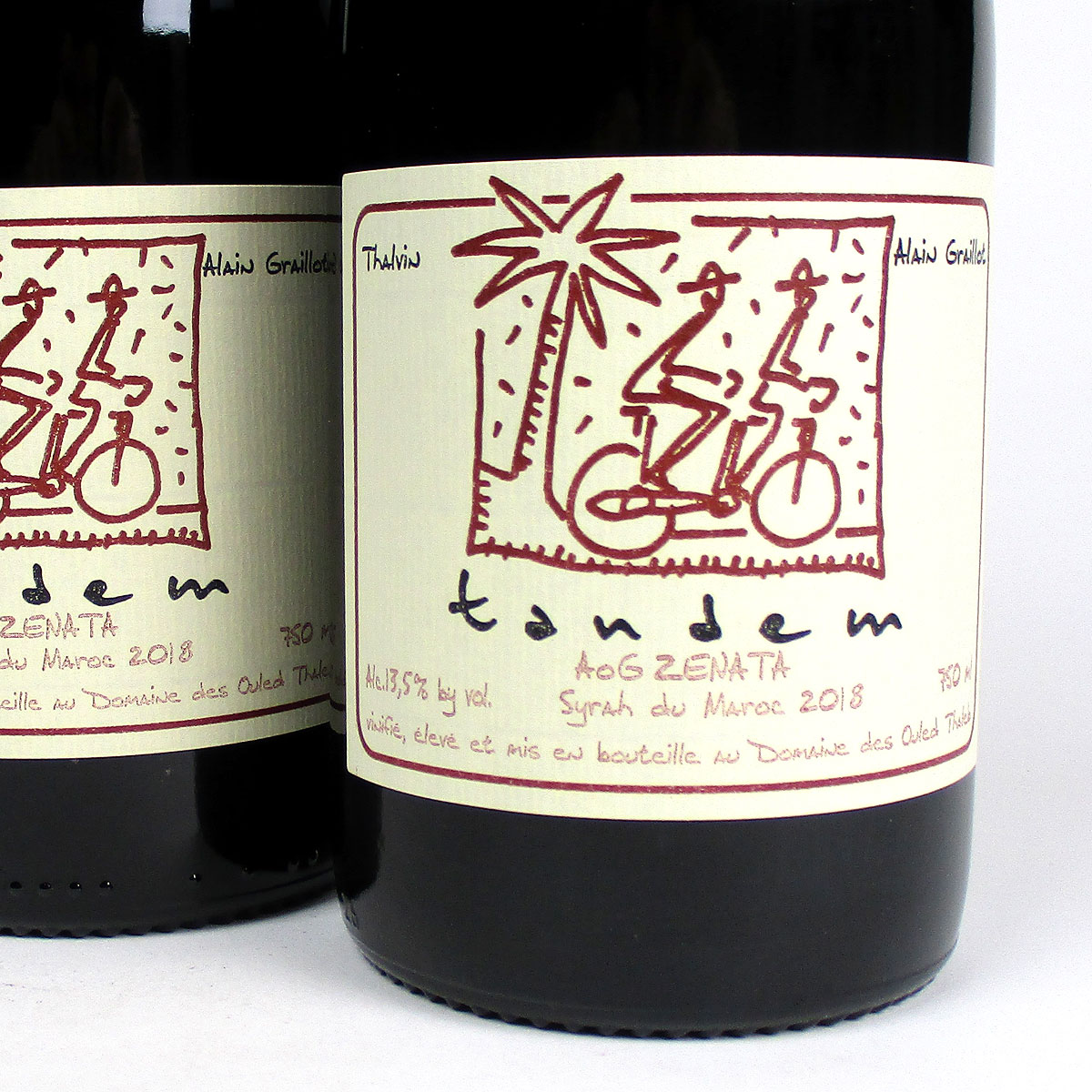 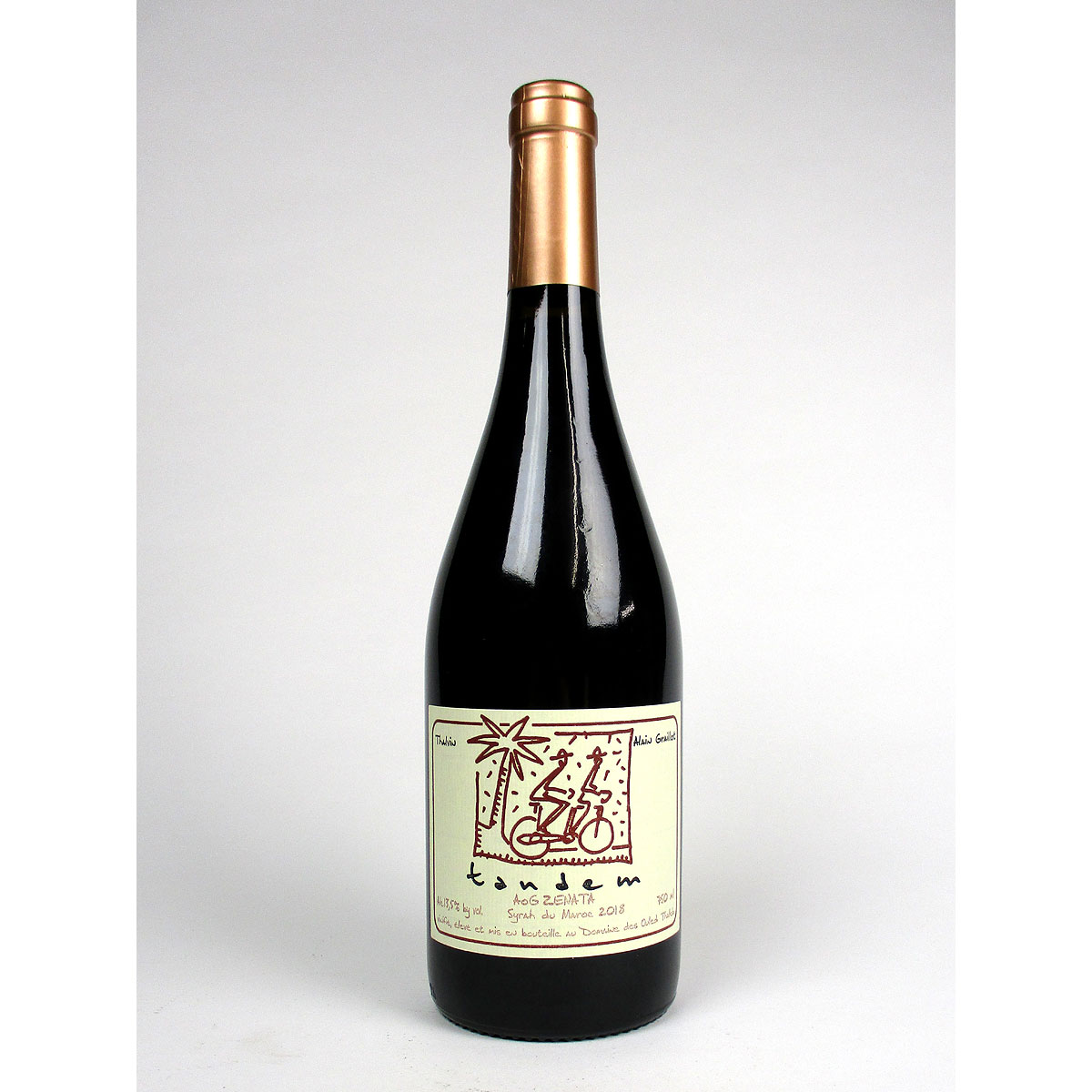 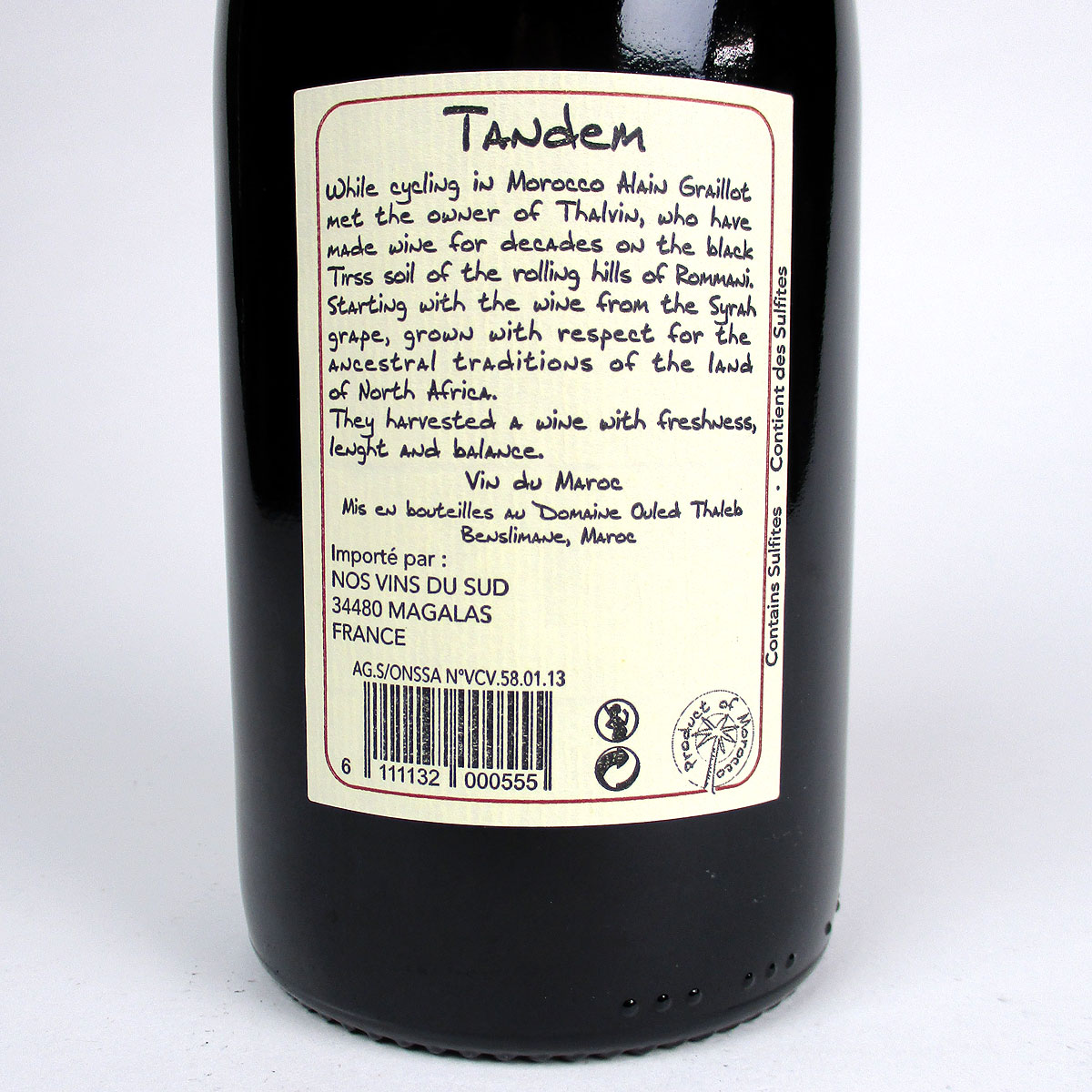 Tandem is an unusual wine from the Benslimane region of Morocco, 30 km NE of Casablanca. It has elements of Alain Graillot's Crozes (peppery, fruit-forward Syrah) combined with warming, baked fruit and spice notes that transport one to North Africa. You don't have to accompany it with a fez, jellaba and tagine, but your guests will probably appreciate it if you do make the effort!

A fairly recent but very welcome addition to the Alain Graillot gamme is their Moroccan joint venture with the Ouled Thaleb winery, NE of Casablanca. This pure Syrah is named 'Tandem' because Alain first met the owners whilst on a cycling holiday.

Moroccan wine has been around for some time - there is evidence of wine-making in the Meknes region 2,000 years ago - but its heyday was during the French protectorate (1912-56), indeed the Ouled Thaleb cellar was built in 1923. Recently, French producers such as Alain Graillot and Bordeaux wine magnet Bernard Magrez have successfully spearheaded a revival based on quality over quantity. Morocco is the second largest wine producer in the Arab world (behind Algeria), with production situated around Casablanca, Essaouira and Meknes. 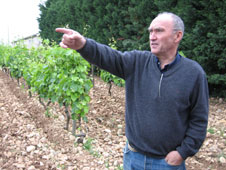 Alain Graillot left a career in agro-chemicals in 1985 to follow a dream with a rented parcel of vines, on the site of a former pig farm, on the Chassis plateau between Tain l'Hermitage and Pont l'Isère in the appellation of Crozes-Hermitage in the Northern Rhône. Today Alain is one of the most widely respected wine-makers in the Rhône valley whose wines grace the list of France's finest restaurants and who counts many celebrated wine-makers among his circle of friends. The Graillot philosophy is as simple as it is successful – to produce appealing, sensibly-priced wines that people will want to drink.

Today Alain's vineyard is comprised of 17.3 hectares of Syrah vines and 2.6 hectares of Marsanne and Roussanne vines (planted in a ratio of 80% Marsanne to 20% Roussanne) which surround his cellars at Les Chênes Verts. This is a great source of clean but characterful, fruit-accentuated red and white Crozes-Hermitage wines for gratifying forward drinking. In favourable vintages, Alain also produces small volumes of a more age-worthy, denser Crozes-Hermitage called 'La Guiraude'. Minimal volumes of Saint Joseph and Hermitage are also made. Since 2004 Alain's son Maxime (born in 1977) has followed in his father's footsteps and has been producing a fruity red Crozes-Hermitage from a neighbouring 6.5 hectare vineyard at Beaumont-Monteux.