A High Time at the High Pavement Evening Café

In the summer time, before the schools break up for the holidays, the team here at Yapp Brothers like to get together and put the world to rights over a meal and a few glasses of wine. We have long established that it is impossible to find a date that is universally convenient but as long as a quorum can make it we try and go ahead. It is great to see colleagues outside the working environment and even better if their partners can join us too. Thus it was that last Saturday we convened in my home town of Frome for a glass of Fredrik Fillitreau’s superb, natural, sparkling rosé, called ‘Fillibulle’, before heading off on foot to a fabulous local restaurant called The High Pavement Evening Café. 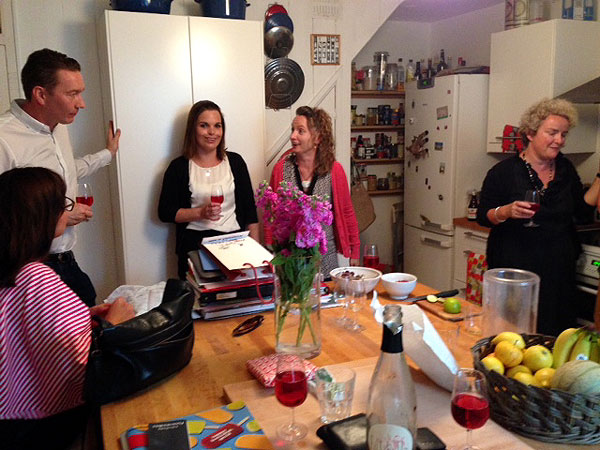 The High Pavement (as locals seem to have abbreviated it to) popped up over a year ago and proved an immediate hit with the discerning Frome foodie firmament before having to close down for months due to some arcane planning complications. Happily these have now been resolved and it is back with a vengeance. The cuisine is Spanish and North African influenced and one doesn’t have to strain too hard to trace chef-patron Stuart Bastiman’s lineage back to the celebrated Iberian restaurant Moro where he cut his teeth under Sam and Sam Clark. 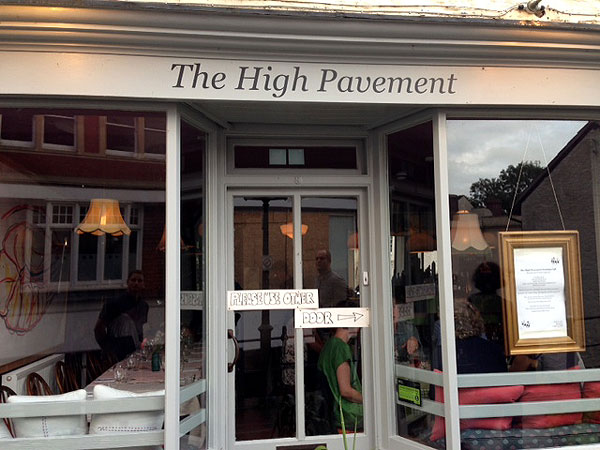 On arrival we were seated at a single, large table and presented with the exemplary menu below which ticks all the boxes for me being short, keenly-priced, imaginative and really inviting. 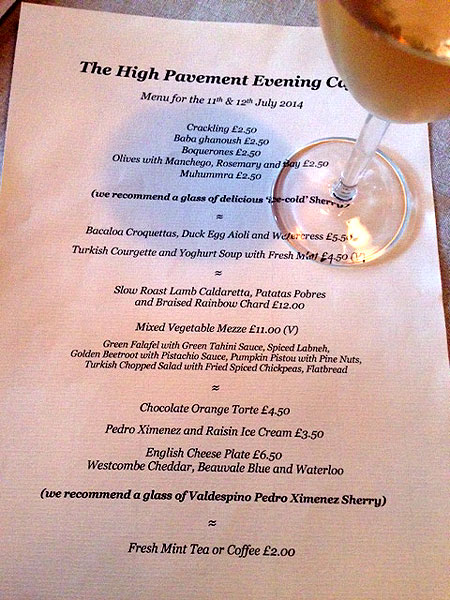 Never a group to hang about gastronomically we promptly ordered all of the pre-starters having established that Boquerones are lightly cured anchovies and that Muhummra is a Turkish dipping sauce made with walnuts, chillies, paprika and pomegranate molasses. Stuart’s partner Aimée Snell, who presides over an attentive, knowledgeable and relaxed front of house team, recommended we kick-off with a Specogna Pinot Grigio Romato 2012 that we were allowed to sample before committing to which is a nice touch. It was delicious – with the palest rosé robe, racy elderflower and redcurrant aromas and a zesty, dry palate of ripe orchard fruit.

Dining at the High Pavement is quite similar to eating in somebody’s front room because it occupies the ground floor of an old town house and so has a lived in and intimate ambience. It is the antithesis of modern, design-driven offerings and should be celebrated for that. What sets it apart (other than the friendly service which should never be over-looked) is the fantastic quality of the food. You can tell it has been cooked with passion and integrity by someone bustling away in a bijou kitchen and if you’re in any doubt you can peek in the kitchen window and watch Stuart in action.

The cod croquettas were terrific but I have been reliably informed that the yoghurt-based soup was out of this world. With our main courses we selected a chest-thumping, Spanish, red Pitaccum Bierzo 2008 that was full and fruity with warming, spicy undertones. It went down very well with the slow roast lamb and appeared to be equally popular with the ‘knock out’ mezzé.

After some indulgent puddings and cheese we tottered off, sated, into the darkness being careful not to fall off the eponymous high pavement. Our timing was providential as the restaurant closed this week for its summer recess. Fear not – they re-open in September when I’ll definitely be going back - come hell or high pavement!