I first became acquainted with the work of Glen Baxter as an impoverished, young graduate when I secured (not very) gainful employment distributing incoming faxes around the labyrinth offices of Arthur Andersen’s Management Consultancy at the Temple, London WC2. My lowly position provided ample time to moon about the corridors admiring the magnificent modern art collection that was presumably part of some elaborate investment or tax avoidance scheme. I was particularly taken with the Glen Baxters with their lovely ligne claire outlines, outrageous scenarios and witty captions in distinctive, hand-written, serifed block capitals. A rare public sighting of Mr Yapp and Colonel Baxter

Decades later, long after my short-lived career in the Facsimile Department had finished, I was serendipitously introduced to Glen in one of Soho’s last remaining Dickensian drinking dens. They say you should never meet your heroes but ‘Colonel’ Baxter is the exception that proves the rule. I soon established that he was both a keen Francophile and oeonophile and, having providentially procured his contact details, subsequently managed to cajole him into illustrating our 2008 wine list. The resultant catalogue was a triumph, entitled ‘Adventures in Wine’ - which has somehow stuck as our strap-line. It featured fearless explorers in pith helmets scouring the viticultural backwaters of France in search of hidden gems accompanied by Glen’s inimitable captions. Visitors to our HQ in Mere can view the originals in our boardroom where they take pride of place on a wall bereft of any other artwork. Happily, a year ago I managed to once again persuade Glen to take on the task of providing the artwork for our annual list (the Baxter cellars must have been at a terribly low ebb at the time) and as the ‘Yapp 2014’ list rolls off the presses I have to say he has excelled himself. From cheeseboards worn as headgear to grape-crushing accordions it is stuffed with brilliantly bonkers Baxterisms that have had our team here in Mere laughing out loud as we’ve proof read the copy. 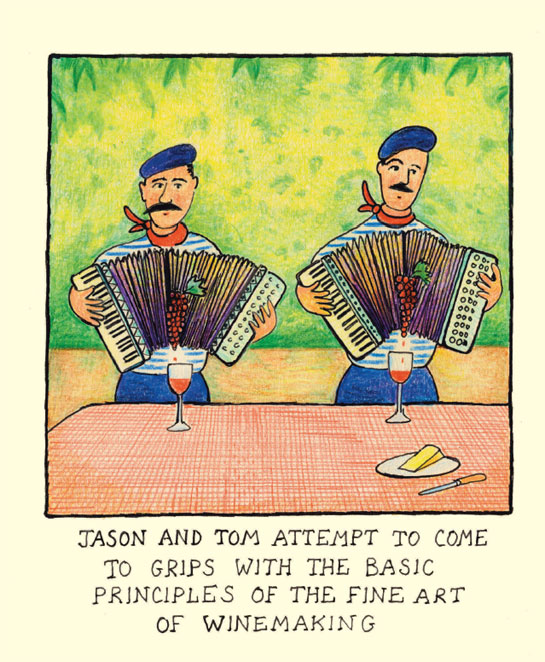 We very much hope you enjoy Glen’s new illustrations as much as we do and will raise a glass to his on-going health and happiness.

You can keep up to date with Glen's work on his website here: www.glenbaxter.com