Don’t Try This At Home

If you fancy tucking into some Canard de la Rouen à la Presse there is only one establishment in the UK that will oblige you – Otto’s Restaurant (service à l’ancienne) at 182 Gray’s Inn Road, London WC1X 8EW. The eponymous patron Otto Tepasse and I go back a long way as he has worked as maître d’ at various wine-orientated restaurants including the Don in the City and the now defunct Auberge de Provence. Prior to gracing these shores Otto was classically trained at the celebrated ‘Le Tour d’Argent’ restaurant in Paris where he learned a lot about wine but more significantly how to prepare pressed duck.</p 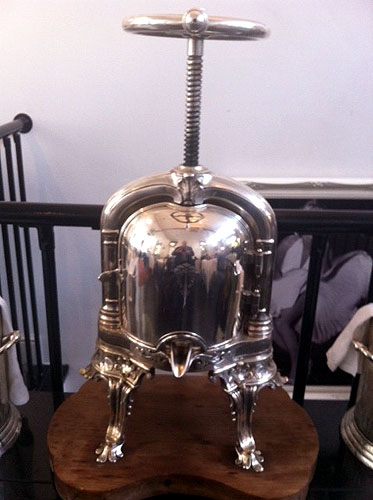 He has long-since harboured a noble ambition to serve us Brits with Challans ducks which he has now realised with the acquisition of a silver Christofle duck press which was made in 1927 for the Hôtel Provençal in Juan-les-Pins and set him back over £20,000. Unsurprisingly, you have to pre-order your duck several days in advance (they’re imported from France on a weekly basis) and a single duck serves 2 people and costs £120. That may sound like quite a bit of dosh but if you factor in the cost of the raw materials and the intensive labour involved it is a veritable bargain. This culinary curio is as much about theatre and tradition as it is about food. The whole process takes roughly an hour from start to finish so you get to enjoy the show before you enjoy the cuisine. 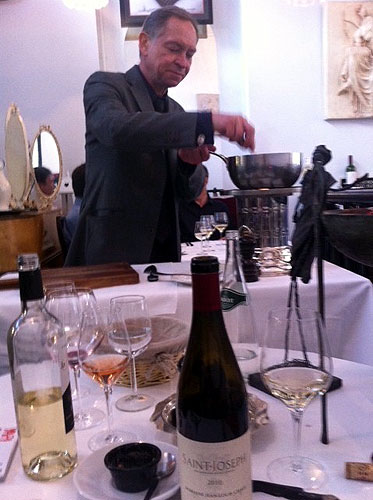 So here’s how you do it. You start off by melting a cube of sugar (to offset any acidity) over an open flame and then make a reduction of Port, red wine and Cognac. To this you add the chopped, roasted liver, blood, cooking juices and marrow. That is then further reduced before the roasted duck is flambéed and then pressed to provide still more jus that is added to saucepan. The contents are then sieved to yield an inimitable, rich, dark, velvet-textured sauce which is the served with the pressed duck that is then carved into thin slivers table-side. 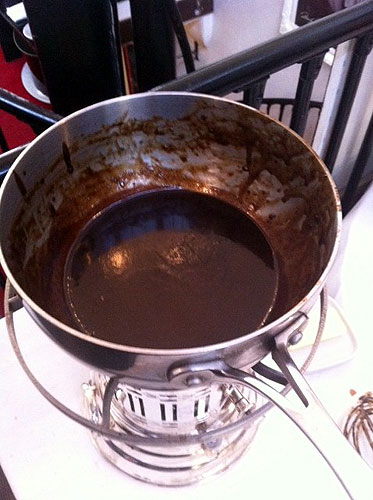 Otto makes it look easy. It isn’t. Which is why famous foodies such as Simon Hopkinson and Fay Maschler come to pay homage. You should too. It really is a once in a lifetime experience.

It would be remiss of me not to mention the wine list which is extensive, well-considered and very reasonably-priced. Otto know his stuff so you would do well to heed his vinous advice. The location and the kitsch décor are both incongruous which makes this little gleam of belle époque decadence all the more remarkable.