For Every Beginning, There Is An End.

The end, I hope, will be celebrating in the spa town of Bagnères-de-Luchon on Saturday 14th July, Bastille Day. However, the substantial Ying for that Yang is that I aim to have cycled 197km over the Pyrenees’ finest climbs after leaving Pau that morning.

Along with several pals and around 7,000 other riders, I have committed to another Etape du Tour – where amateurs tackle a stage of that year’s Tour de France. The Etapes are never a walk in the park, but this year the organisers have really shown a sense of humour by picking possibly the toughest day of the entire three week professional tour to test the hoards of enthusiasts.

Here’s the profile of this fearsome day out. 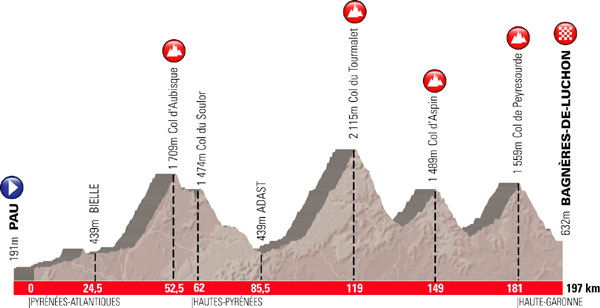 The beginning was on Monday 2nd January with a couple of laps of Richmond Park. Legs a bit heavy, much work to be done.

I’ll report back in February!