High Points of the Hérault

As a keen oenophile and Francophile I have an enduring interest in the celebrated ‘Grands Vins’ of Burgundy, Bordeaux and the Rhône as well as less well-known wines from the Loire, Alsace and Provence but the region that is increasingly commanding my attention is the Languedoc. Specifically, the limestone outcrops of the Hérault, which lie between the Cevennes and the Mediterranean, and have been historically overlooked by the fine wine firmament but have enormous potential and offer fantastic value for money.

A case in point are the wines of the Pic Saint-Loup, which take their name from the towering 658 metre high limestone edifice which dominates the skyline north of Montpellier. Although local aficionados have considered this an important enclave of viticulture for centuries it was only granted full Appellation Protégée status in 2017 and that only for red and rosé wines. Some excellent white wines are made here but growers will have to contend themselves labelling those as generic ‘AOP Languedoc’ for the foreseeable future. 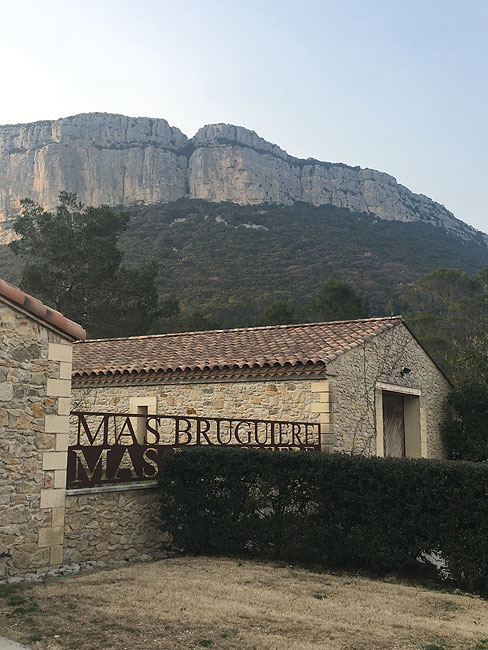 Back in 2004 we, rather cheekily, pitched up at the cellar door of the Mas Bruguière without an appointment and were delighted to be granted an audience with the then patron Guilhem Bruguière. Our first tentative sampling of his wines was a revelation and we placed our inaugural order on the spot. Guilhem’s son Xavier took over operations in 2007 and gained full organic accreditation for their entire 20 hectares of vines in 2011. His white wine, called ‘Les Mûriers’ is made from a blend of 80% Roussanne and 20% Marsanne that are raised in vat and barrel for 10 months prior to blending and bottling. With diverse scrub scents and a yellow stone fruit palate offset by nervy mineral notes. It doesn’t demand food accompaniment but Xavier thinks a fillet of seabass with buttered cabbage is a good match. A more prolific red, called ‘L’Arbouse’ is made from 60% Syrah (matured for 12 months in wood) and 40% Grenache Noir (aged in concrete vats for 12 months). Redolent of the garrigue herbs and berries, that proliferate in the vicinity, it is a dark, briary life-affirming wine that can support 3-5 years bottle age and represents terrific value for money. 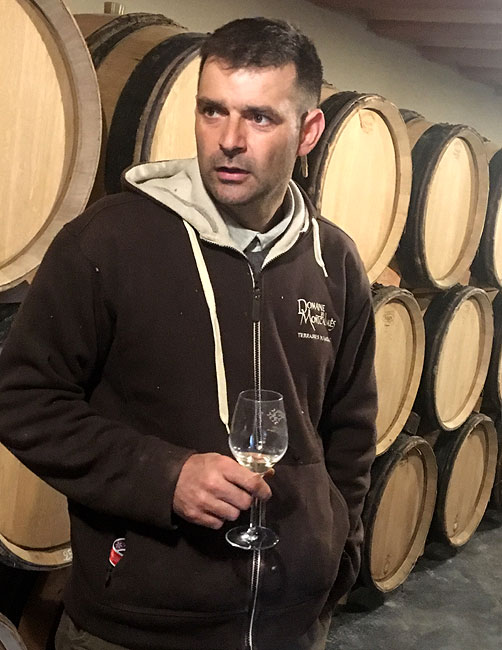 A short drive along the D32 takes us to the hill village of Puéchabon, 18 kilometres to the south-west of the Pic’ where we find the H.Q. of talented vigneron independent Frédéric Pourtailé. Here on the western fringe of the Terrasses du Larzac, Frédéric has garnered a reputation for producing characterful, age-worthy wines with a strong sense of terroir at his Domaine de Montcalmès. After training with Alain Graillot in Northern Rhône Frédéric produced his first vintage here in 1999 and has gone from strength to strength in the ensuing two decades. He currently presides over 25 hectares of vines, spread across 4 communes, which are farmed organically and in accordance to the lunar calendar. Although best known for his red wine Frédéric bottles a superb white from a blend of Marsanne and Roussanne that are matured for 2 years in used oak barrels. Almost Burgundian in its richness and length the lion’s share of production is snapped up by savvy sommeliers and canny cavistes before it can hit export markets. The superb red ‘Domaine de Montcalmès’ is blended from 60% Syrah and 20% each of Mourvèdre and Grenache Noir harvested at very low yields of about 25 hectolitres per hectare. It also undergoes a 24 month élévage and the finished wine is both powerful and polished – not unlike a Châteauneuf-du-Pape but with a wilder untamed quality. Scents of lavender, thyme and dark cherries precede a palate of briary hedgerow fruit with peppery undertones and enough tannic grip to support (at least) a decade’s bottle age. The current 2016 vintage is fantastic and I look forward to seeing how it evolves in the cellar.

Based just 6 kilometres to the south-west, outside the village of Aniane, is an estate that has captured wine enthusiasts interest like no other – Domaine de la Grange des Pères. Here former physiotherapist Laurent Vaillé created his dream vineyard after training at a roll call of iconic wineries – Chave in Hermitage, Coche-Dury in Meursault and Domaine de Trévallon in Provence. Production here is principally focused on a single red wine that is made from a blend of 40% Syrah, 40% Mourvèdre, 10% Cabernet Sauvignon and 10% Counoise that are vinified in vat and barrel for 20+ months prior to an assiduous assemblage. Proudly evocative of the garrigue (sprigs of thyme and bay are placed inside every case) it has a complex core of forest fruits supported by fine-grained tannins and a fresh acidity that will sustain 20 years bottle age. Fiendishly difficult to source on secondary markets it is a sensational wine that fully justifies its outstanding reputation. Vintages of less than 5 years of age should be decanted and game and wild mushroom dishes make excellent accompaniments.

The days of the Hérault being home to inferior vins ordinaire are over – the genie is out of the bottle! 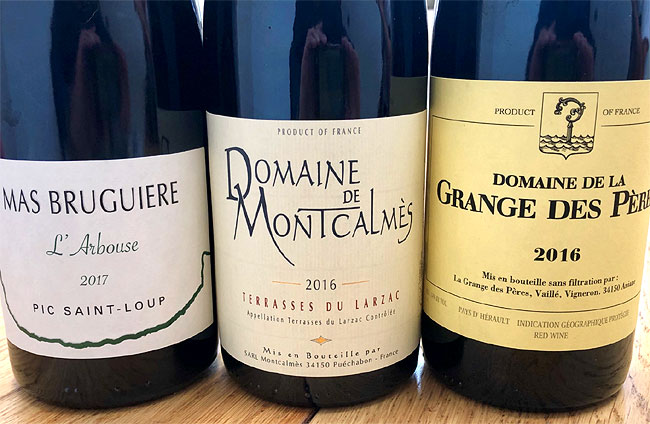