I was privileged enough to have been invited by our transport company Geodis to attend the annual International Wine Challenge 2011 Awards dinner at London Hilton Park Lane Hotel a first time for me to attend an event like this.

When I initially received the invitation and noticed the dress code was 'Black Tie' a moment of sheer panic set in because the "I've got nothing to wear" sentence went through my mind at a fair old speed (this, by the way, is something every woman can relate to even with an overflowing wardrobe), however this also gave me an excellent opportunity to shop for a new frock.

With the frock situation positively sorted I accepted the invite and last Tuesday was the big event. With Yapp Brothers nominated in 3 categories (respectively: Rhône, Loire and Best French Regional Specialist) the whole event was even more exciting because winning one of these awards not only gives Team Yapp a great boost and lots of pride, but we also get recognised for all the hard work we put into the company.

I travelled up with my two directors: Jason Yapp and Tom Ashworth who were attending the event as well and they kindly dropped me off at my hotel where I then had 2 FULL hours of getting ready, blissfully on my own. (Being a Mum of 2 young boys getting ready in my house is a whole different ball game, I normally have about 5 minutes so, by the time I walk out of the house, I am just hoping I am wearing two shoes the same).

Ready to go I met Steve Harris from Geodis Dover and was introduced to his colleagues and the rest of the guests I would be sitting with during the evening. Arriving at the Hilton it was busy with glam women in beautiful dresses and dapper men in their DJ's and most important of all the Champagne was flowing.

The hosts of the evening Charles Medcalfe and Tim Atkin MW took to the stage to announce the results, but because there are so many different categories only a few results are announced 'live' during the 3 course dinner that was accompanied with a varied choice of IWC award-winning wines.

All the winners of the pre-announced categories were waiting backstage and sure enough there I saw Jason appear on stage so that meant WE HAD WON!!! Although we 'only' won 1 out of 3 categories (competition was fierce) this was the best one to win, so I am happy to announce that Yapp Brothers is the 2011 winners of Specialist Merchant for....RHÔNE for the second consecutive year in a row.

While thoroughly enjoying myself the rest of the evening, networking, talking to other colleagues in the trade and celebrating their success it all went by in a flash and I met up with Jason and Tom to celebrate the fantastic result for Yapp Brothers and we hope to go for the hat trick next year. 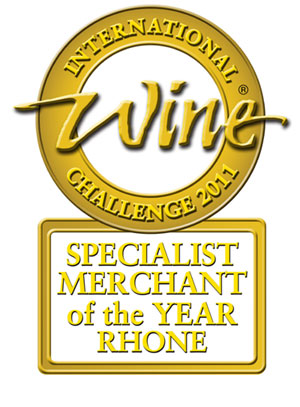