Tom and I were delighted to attend a dinner in honour of the august ‘Academie Internationale du Vin’ in the majestic setting of Vintner’s Hall last Monday evening. We had been invited by our good friends Christian and Birgit Imbert, from Domaine de Torraccia in Corsica, making a rare but welcome visit to these shores. While we had correctly assumed that this was going to be a fairly smart gathering (and had thankfully scrubbed up for the occasion) we hadn’t realised how distinguished the guest list was until we were confronted with a seating plan including more iconic wine names (Perrin, Prats, Gaja, Draper, Jensen etc.) than we had ever seen gathered in one room. 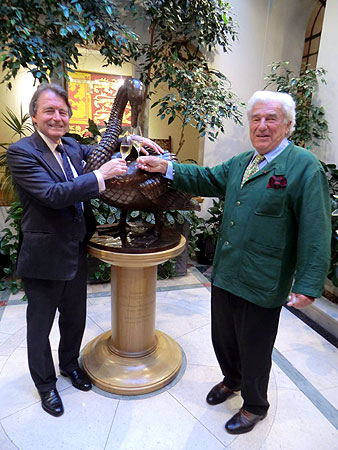 Despite the formal surroundings and preponderance of wine royalty this was a very jolly and light-hearted occasion. We were handed flutes of Pol Roger ‘White Foil’ as an aperitif which were assiduously topped-up (from magnums) by the Vintners’ Company’s attentive staff. The Company’s General Manager Steve Marcham then gave us a highly informative talk on the Vintners’ impressive history followed by a tour of the premises including a rare opportunity to visit their fabled cellars which pre-date the fire of London and have never leaked despite being only metres away from the might of the river Thames!

Once seated in the Great Hall we were served a delicious Warm Tian of Smoked Salmon and Minted Peas accompanied by a superb Château de Beaucastel blanc – a triumph in the difficult 2008 vintage, and a delicious 2006 Maximiner Grunhauser Abtsberg Riesling. Fine wine and equally fine conversation then flowed freely through 2 more courses before we were treated to the Vintners’ Company’s infamous ‘Calice d’Amour’ – a ‘loving cup’ whereby an antique silver vessel is brim-filled with an arcane, wine-based concoction that is circulated amongst diners who toast each other in turn in a carefully synchronised manoeuvre that gave me flashbacks to the ill-fated country dancing lessons of my youth. Fortunately I managed not to disgrace myself with any dribbles or spillages and the whole affair passed off pretty smoothly. Frankly I’m amazed that the dreaded Health and Safety brigade haven’t seen fit to ban this ritual yet but our foreign visitors showed great sang froid and no one bulked at the idea of a communal cocktail. 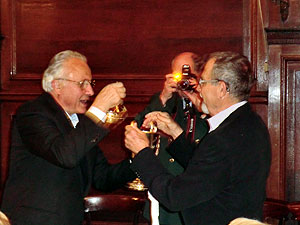 Angelo Gaja and Paul Draper ‘man up’ to share the Loving Cup!

We were then indulged with a glass of glorious 1970 Grahams Port from the Vintners’ enviable archive and the Company’s Master Michael Turner made a gracious and witty speech encompassing subjects as diverse as the Queen’s Thames boat pageant and the equitable outcome of that evening’s England vs. France football match. We then bade Christian and Birgit a fond farewell but not before they had handed over a bag of peerless Corsican salami made from the wild boar that terrorise their vineyard – a great honour that won’t require too much wine matching contemplation!