Having recently moved house I was rummaging in boxes for 'lockdown' reading material and made an unusual discovery – a hardback first edition of 'The Life and Loves of a She Devil' by Fay Weldon. It was signed and dated 'Fay Weldon Castle Cary, 25th Feb 1984'. Unfortunately, that inscription was preceded by a fateful 'For Jason' – which diminishes its value enormously. Nil desperandum – it was an amusing find. I think we can all agree that it's an odd choice of book for a 16 year-old boy to buy but book signings were a rarity in my then home town in the 1980s and I think I pitched up out of curiosity and then bought the book because that is what everyone else was doing. I certainly didn't read it then – and haven't since – but I do remember the award-winning 1986 BBC adaptation being requisite viewing with my mum and sisters. 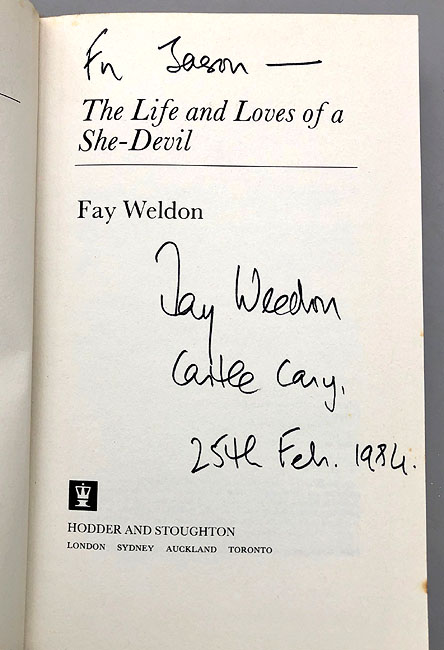 A further discovery inside the flyleaf was a hand written envelope addressed, in a spidery hand, to me in person care of 'Yapp Brothers Ltd'. This contained a 'Collins' from Sybille Bedford, dated 20th November 1997, thanking me for some 'Cassis: Clos Sainte Magdeleine Blanc' that I had sent her as a gift in the shameless hope of eliciting some written correspondence from the great author. We had met at a Rhône themed wine dinner at the Reform Club, which I hosted (in an ill-fitting dinner jacket) as an eleventh hour stand in for my father, who had flu. I do remember being incredibly nervous beforehand but Sybille is on record as having 'greatly enjoyed your company and speech' so I can't have been too bad. That said, I clearly recall that she relied on an ear trumpet (which fascinated me) so she may have been giving my oratory the benefit of the doubt. The reason I had opted for Cassis and not a Rhône wine is that Sybille had grown up in the vicinity as recalled in her terrific autobiographical novel 'Jigsaw'. The envelope also yielded two table place cards from the Reform Club 'Ms Sybille Bedford' and 'Mr Jason Yapp' which reveals how star struck I was. Now, if I can only find a copy of Jigsaw I can transport myself to the Côte d'Azur in the roaring '20s – I may even accompany it with a glass or two of Cassis. 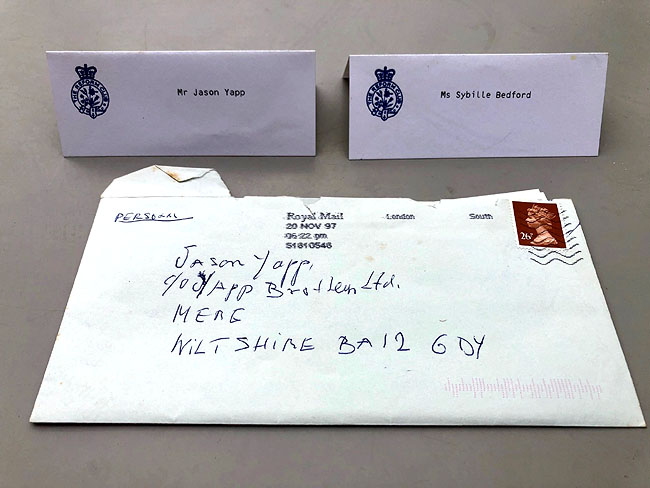