(Not) Cooking with Mother

Those Cath Kidston aproned Domestic Godesses are often preaching on the educational and nurturing benefits of cooking with your children. They rustle up a picture of 1950s homely bliss and product designers have given them the props with retro kitchenware to match. Beautiful children help make picture perfect cakes in a spotless kitchen (I suspect Daddy was having an affair with his secretary and Mummy was on Valium but never mind).

The reality of cooking with young children is more prosaic. First off don’t expect it to be edible – egg shell in the cake mix and tough pastry overworked by hot little hands are more likely. The kitchen will look as though there was an explosion in a flour mill and you may be as tense as a coiled spring as junior handles potentially lethal kitchen gadgetary (better check he’s still got all his digits).

Now that our boys are older (10 and 13) a much more satisfactory arrangement is to allow them to cook for us. William – our 10 year old – rustles up toast and scrambled egg for us on the weekend (not quite so keen on the washing up) while Alfred sees cooking as a competitive challenge pawing over cook books until he finds the shortest recipe/ingredient list (River Cafe Cookbook). 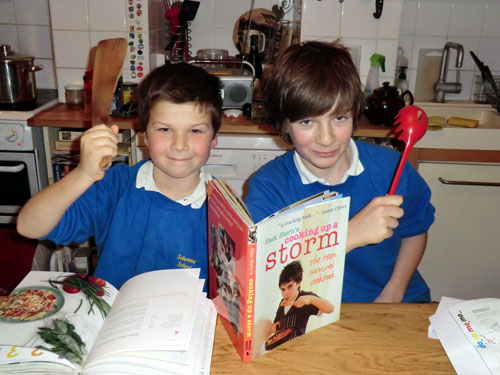 Clever Aunty Katy bought the boys a great teen cookbook, Cooking Up A Storm, by Sam Stern so now they have their own recipes which they treat us to (chicken breasts stuffed with Boursin and wrapped in Parma Ham is a favourite).

So despite my lack of mothering skills we’ve managed to turn out two culinary aware boys. We can’t take full credit though – they’re avid viewers of Masterchef and regularly do spoof crits on their fishfingers and baked beans. Perhaps we’ll get a take out this evening....