I attended a fascinating and uplifting talk yesterday evening by an inspirational individual at Rook Lane Chapel in Frome. Back in 2005 Hugh Broughton was running a small architectural practice in London, whose biggest commission to date had been a Girl Guides meeting centre in Wimbledon, when he heard on the Today programme that the Royal Institute of British Architects were organising a competition to design a new Antarctic research station. Despite lacking any of the requisite specialist experience Hugh thought he'd 'give it a go' and, to cut a long story a bit shorter, was subsequently amazed to find his pioneering 'pod' design on a very elite short list. 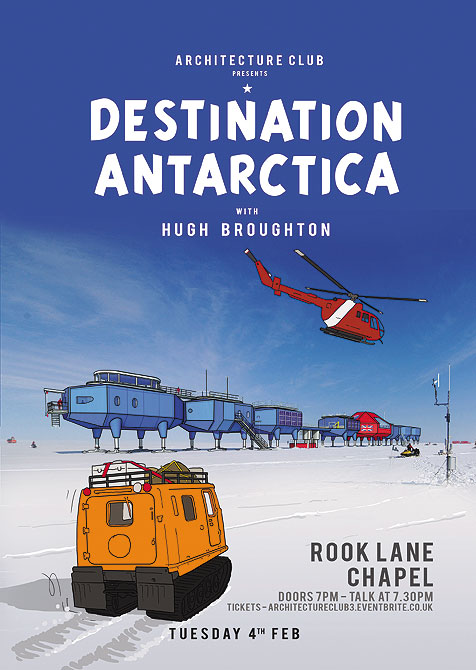 Hugh attributes some of his success to his young children's enthusiasm for Thunderbirds giving him the right mindset for a cutting-edge, futuristic design. One great advantage of Hugh's proposal was that his pod units could be partially pre-assembled, in sections that came in under the critical 9 ton figure, which is the load-bearing limit of shelf ice. These pieces could then be dragged into position and rapidly put together and clad in the tight 10 week summer season when outdoor construction is viable. 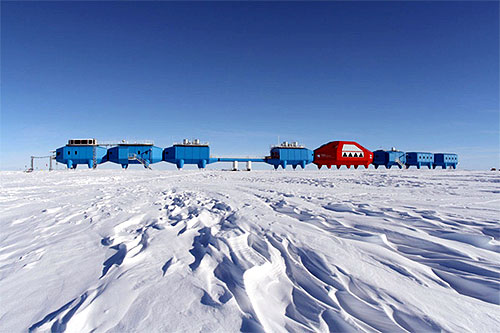 After snow trials assisted by NASA(!) and numerous interviews with veteran polar researchers and their co-workers Hugh's revolutionary design for the Halley VI research station with pods mounted on skis and hydraulic legs successfully saw off all competition. It has duly been built and installed and is now fully operational. Everyone involved in polar research seems to regard it as a roaring success, so much so that Hugh's practice is consulting to numerous other countries Antarctic and Arctic research projects. He is now the 'go to' guy if you want a building that will work well in extremely low temperatures. 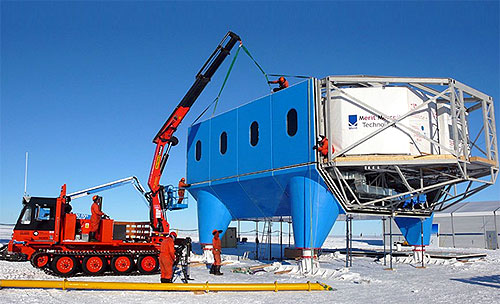 Hugh seems a bit surprised by his success and is incredibly modest about his achievements. He must be or he wouldn't be talking free of charge in Frome on a wet evening in February. His only regret is that so few people will see his designs first hand. He explained that if you extrapolated the same population density of Antarctica to the UK there would be just 15 of us on this sceptred isle!

The resounding message here is to believe in yourself and to follow your dreams. I left the room amused, amazed but above all inspired. I resolve to be more childish!

With thanks to Hugh Broughton, Frome Architecture Club and Matt Wellsted for allowing us to use his marvellous hommage to Hergé image.