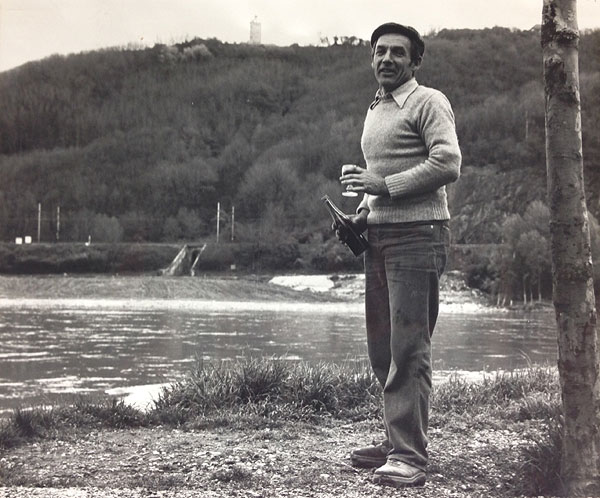 Emile Champet - by the Rhône at Verenay beneath the Côte Brune, circa 1970.

In response to a barrage of queries from an American wine journalist I have been rifling through our cellars, my old note books and photograph archives as well as grilling my father for arcane facts about the Champet family's vine holdings and our trading history with them. We first shipped wines from Emile Champet back in 1972 when we listed the (very good) 1970 vintage of his only cuvée of Côte-Rôtie and we have continued to ship the family's wines ever since. As Northern Rhône vignerons have enjoyed international recognition in late 20th and early 21st centuries this small, family-run operation has remained refreshingly understated and continues to be a source of well-crafted, honest, traditional wines with a strong sense of terroir and relatively modest price tags. 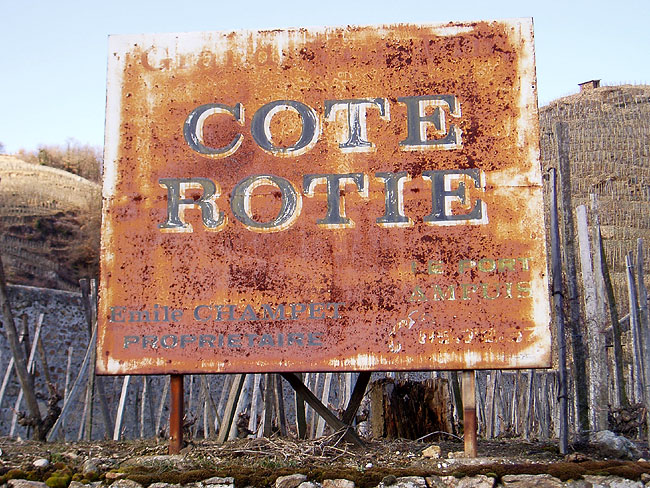 Emile Champet, who was born in 1925, produced his first commercial bottling of Côte-Rôtie in 1967 having previously sold his wine en vrac to local négociants. He had managed to acquire small parcels of vines on both escarpments in the appellation and from (at least) 1978 onwards this was reflected on a neck label that read 'Côte Blonde' on the right-hand side and 'Côte Brune' on the left. He was joined by his son Joël (born 1955) in 1985 and 5 years later, on reaching the mandatory age for 'la retraite', at 65, nominally retired. He did however hang on to an officially sanctioned half hectare of vines and continued to bottle Côte-Rôtie under his own label up to and including the (excellent) 2005 vintage producing around 2,400 bottles a year for friends and long-standing clients. Emile died in 2007 aged 82. 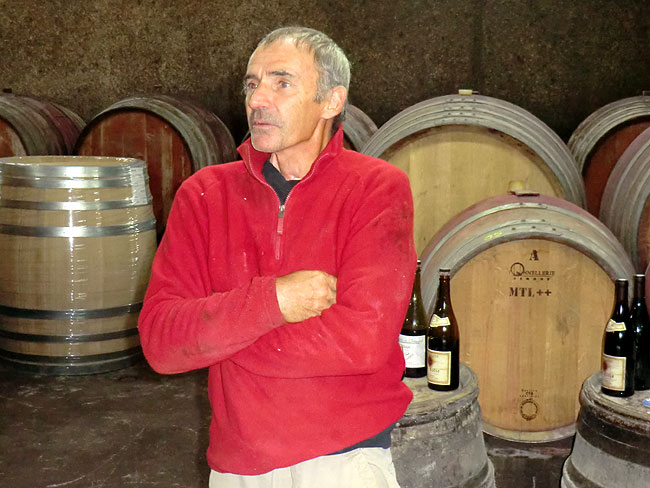 Joel Champet in his cellars

From 1990 Joël Champet concentrated his efforts on the acclaimed single vineyard site of 'La Viallière' above Verenay on the Côte Brune where he has now reclaimed and re-planted 3 hectares of vineyard surrounding the (self-built) family home and winery. The 'Côte Blonde' epithet was dropped from the Domaine's wines in the 1983 vintage and from 1990 onwards they have all been bottled as 'La Viallière'. The family still own Emile's original plots on the Côte Blonde' but they lease these to other wine-makers in exchange for vines which abut their main vineyard. Today Joël is ably assisted by his 2 sons, Romain, whose name was added to the label in the (short and hot) 2003 vintage and Maxime, who joined the operation in 2009 since when the wine has been bottled as 'Domaine Champet'.

All 3 generations of the family have favoured a cépagement of 95% Syrah and 5% Viognier that are vinified together in a whole bunch field blend before being racked into concrete vats for 2-3 weeks before a 10 month élevage in used oak casks and barrels. The finished wine seldom has an alcohol level above 12.5°; the highest I can find in our cellars is the legendary 1990 which is labelled with an ABV of 12.8°. Nothing much has changed here over the last 43 years because nothing much has needed to be changed. The Champet Côte-Rôtie is, in many ways, the antithesis of the pumped-up, oaky, concentrated Northern Rhône Syrahs that came into prominence in the 1990s. They are unreconstructed and all the better for it. In his 1997 tome 'Wines of The Rhône Valley' Robert Parker, who many would argue has influenced wine making in these parts more than anyone else wrote: "Stylistically, I find (Joël) Champet's Côte-Rôtie the closest thing to a big Côtes de Nuits burgundy (a spicy, aggressive Chambertin comes to mind instantly) than any Côte Rôtie made by his peers."

Typically the Champet's 'La Viallière' has a deep purple robe when young, and appealing dark black fruit, violet and pepper scents, the mid-weight palate has pure, granitic dark fruit flavours underscored by cool mineral notes and a fresh acidity supported by fine-grained tannins. It drinks well on its youthful fruit but comes into its own with 5-10+ years bottle age. Compared with many of their peers the Champets have eschewed outside attention and 'stuck to the knitting' which is why they are due some belated recognition for maintaining tradition and a true sense of terroir and a moment, at least, in the spotlight!