The phrase Curate’s Egg? I’ve always liked it, I know it means ‘good in parts’ but I’ve never known the origin of it – maybe a job for Google tonight but it’s still a very apt description of last week.

So, that was the week that was. I’m back at Yapp HQ after a week away in the wilds of North Wales where we literally had every possible permutation of weather thrown at us. As I walked into the Yapp yard today in our warehouse manager cycled past shouting ‘Hi Hamish, did you canoe back?’

Thankfully, small-ish children and wine can weather any storm and the usual suspects all assembled in North Wales as planned. It’s a very small campsite and hasn’t changed much in the last 40+ years that I’ve been going there but it’s always been a camp site of two fields.

Like North / South London, New York East / West side, Lancashire / Yorkshire – the two fields rarely mix. My children clearly don’t follow historic protocol and play in both – as a result on (one of the) Diamond Jubilee evenings there was an impromptu gathering – and both fields were invited – we marked this landmark occasion with a bit of bunting, some beer and a chilled bottle of the ever reliable Crémant de Loire Mousseux Brut as the sun also decided to join in on this unprecedented gathering. 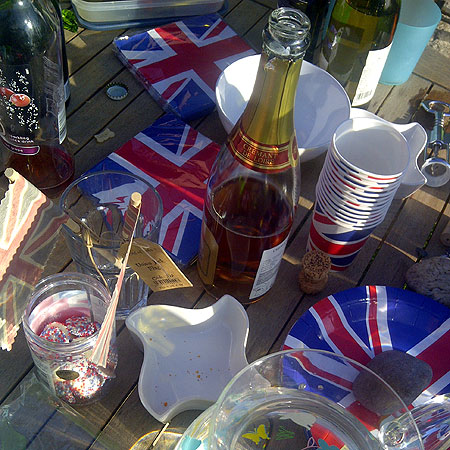 Jeremy, my Francophile / oenophile friend (or partner in crime if you will) arrived mid-week so we braved the inclement weather by battening down the appropriate hatches and while the amassed children drew, played games and the such like we moved through some great 2011 rosés (Reuilly: Pinot Gris 2011 and the simply delicious Irouléguy: Domaine Illaria Rosé 2011) but also recreated one of the great food and wine matches – fresh English asparagus and Vin de Corse Porto Vecchio: Domaine de Torraccia Blanc 2011.

The Welsh as always weathered the storms – and the Lion Pub in Tudweiliog still held onto it’s Welsh bunting throughout the week! 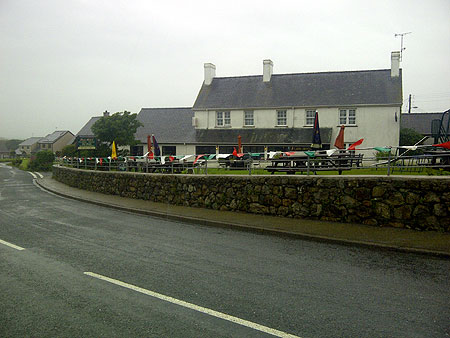 *[ed. FYI, lifted from Wikipedia:
The term 'Curate's Egg' derives from a cartoon published in the British magazine Punch on 9 November 1895. Drawn by George du Maurier and entitled "True Humility", it pictured a timid-looking curate taking breakfast in his bishop's house. The bishop remarks with candid honesty to his lowly guest: "I'm afraid you've got a bad egg, Mr Jones." The curate replies, desperate not to offend his eminent host and ultimate employer: "Oh, no, my Lord, I assure you that parts of it are excellent!"
The term relies on an objective analysis and intuitive understanding of the depicted scenario, for since an egg is a sealed unit, unlike a piece of fruit open to the atmosphere which can be rotten at one end only, it must either be entirely fresh or entirely unfresh. It decays at the same rate uniformly, akin to the process of the contamination of water. A partly good egg is thus as impossible a physical phenomenon as a partly "corked" bottle of wine. The humour is derived from the fact that, given the social situation, the timid curate is so obsessively fearful of giving unintended offense that he cannot even agree with the most obvious statement of fact made by his superior which may not be totally complimentary to himself, and thereby ends up looking absurd himself by exposing his obsequious personality. The term is often used incorrectly in modern usage to denote something which has an even mix of good and bad qualities, the overall quality of which is thus not easily determinable. In the final issue of Punch published in 1992, the cartoon was re-printed with the caption: "Curate: This f***ing egg's off!"]