I find that the prospect of another long, wet UK winter is mitigated by the advent of the Game season. Darkness descending at 5pm in October can be endured with the prospect of pheasant ragu, preferably with shaving of English truffles and a glass or two of something from the Southern Rhône. Accordingly, as Spring beckons, I try to mark the change by baking a Game Pie. With the season for most birds ending on 3st1 January and for deer in mid-Feb, butchers have some decent deals on clearing stocks over March. I stick to a fairly simple 'Game' plan – dust and brown the assorted meat and pancetta in a thick bottomed pan, then add some vegetables and herbs and sufficient red wine to cover. Slow cook for an hour and a half. Then hoik out the meat, reduce the sauce and blend the soft vegetables into the sauce so its quite thick. 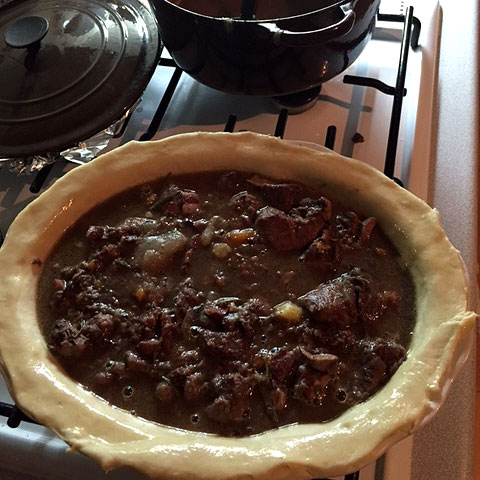 I then place the meat into the pastry-lined pie dish, before pouring in the gravy and sticking the pastry top on, then baste with an egg. Forty-five minutes in a hot oven later, you've got a delicious Game Pie. My effort wouldn't have won any awards on the Great British Bake Off, but I doubt any of those contestants had such a good wine match – Ron Laughton & Michel Chapoutier's La Pleiaide 2012. I would recommend a fairly robust red with Game Pie (as opposed to Game itself) – perhaps Brézème Grand Chêne 2013 that features in our Bin End Sale this Saturday (19th March, 9.30am - 4.30pm).

For more information on the Bin End Sale, where we'll have over 30 wines open to try before you buy and we'll be joined at Yapp HQ by our friends Godminster Cheese and Claude the Butler, give us a call.