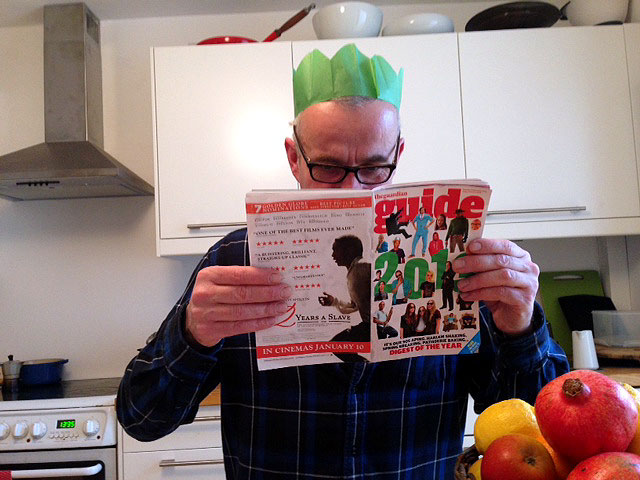 Although my family would refute this with alacrity I genuinely feel that I have a fairly sunny disposition and try to embrace the positive in life. I don't hold much stock with the naysayers who claim we've never had it so bad. As a fountain pen-yielding child of the 1970s the tablet on which I'm writing this is an object of wonder - if you showed it to my teenage self I'd be amazed. My middle-aged self is pretty darned impressed but as I peruse our bumper, festive TV guide in search of some festive cheer I have to concur the doom-mongers have got a point. Where did we go wrong?

As is de rigeur in Telly-land at this time of year it seems best to address this in list format. So here we are. Jason's Top Ten inexplicably dreadful festive scheduling atrocities.

1. Boxing Day. BBC1, 9.20pm 'Len Goodman's Perfect Christmas'
Strictly Come Dancing Judge Len Goodman takes a trip through the TV archives...
This is just an out and out swiz. I'm sorry but that is prime TV real estate desecrated by mindless inanity. I don't even mind Len but this is well short of perfection.

2. Christmas Day. BBC2, 8.30pm 'Morecombe and Wise: Leading Ladies'
Penelope Keith presents a compilation of highlights featuring female stars of stage and screen.
Is this the best we can manage with licence payers money on the big day? 30 year-old re-heated leftovers. Yes they were good then but what about the here and now?

3. Boxing Day. BBC2, 9.15pm 'Ben & James Versus the Arabian Desert'
Ben Fogle and James Cracknell follow in the footsteps of British explorer Wilfred Thesiger and attempt to cross trek across a portion of the Rub' al Khali.
Why? Two b-list celebs battle to remain relevant.

4. 28th December. Channel 4, 9.00pm '50 Funniest Moments of 2013'
A countdown of the most hilarious, surprising and sometimes shocking moments of the past 12 months.
Nay, nay and thrice nay! This really is the bottom of the barrel.

5. Christmas Day. Channel 5, 8.30pm 'Eddie Stobart: 12 Days of Christmas'
A compilation of the most memorable festive moments from the series following the haulage company. (Repeat!)
If they're that memorable why do we need them served up again. Non merci.

6. Christmas Eve. Channel 5, 9.10pm 'Greatest Ever Christmas Movies'
Countdown of the best festive films, from It's a Wonderful Life to Bad Santa. Including contributions from Gemlins star Zach Galligan.
Well, I was going to give this a miss but if it's got contributions by Zach Galligan...

7. 29th December. Channel 5, 9.00pm 'An Audience with Bruce Forsyth'
The versatile veteran entertainer reveals his many talents in a feast of song and dance. (Repeat)
We appear to be locked into some kind of weird 1970s time-warp. Call for the Doctor!

Paradoxically I can't include Celebrity Come Dine With Me (27th December. Channel 4. 8.00pm) as it is so bad it's mesmerising. Why would anyone who wasn't destitute agree to participate?

Finally it would be churlish not to mention a couple of gems that glisten on the midden. Sherlock (New Year's Day. BBC1, 9pm) is keenly-anticipated by the Yapp household and Death Comes to Pemberely (26th-28th December. BBC1, 9pm) is an inspired PD James Murder Mystery deploying a dramatis personae of Jane Austen characters. Could there possibly be a more wicked cad than Wickham?